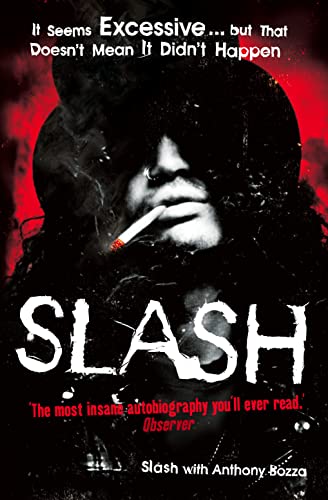 Slash: The Autobiography
by Slash

It seems excessive...but that doesn't mean it didn't happen.

Slash: The Autobiography by Slash

It seems excessive...but that doesn't mean it didn't happen.

The mass of black curls. The top hat. The cigarette dangling from pouty lips. These are the trademarks of one of the world's greatest and most revered guitarists, a celebrity musician known by one name: Slash.

Saul "Slash" Hudson was born in Hampstead to a Jewish father and a black American mother who created David Bowie's look in The Man Who Fell to Earth. He was raised in Stoke until he was 11, when he and his mother moved to LA. Frequent visitors to the house were David Bowie, Joni Mitchell, Ronnie Wood and Iggy Pop.

At this time Slash got into BMX bikes and would eventually turn professional, winning major awards and money, but at 15 his grandmother gave him his first guitar. Sessions with numerous local LA rock bands followed until a fateful meeting with singer W Axl Rose...and the rest was rock history. Guns N' Roses spent two years builiding their reputation before Appetite for Destruction was unleashed on an unsuspecting world.

Chart success and global domination followed but with it came the inevitable fall - addicted to heroin, booze and cigarettes the band imploded in a rift between Axl and Slash that is as deep today as ever. But with a new wife, kids and new band Velvet Revolver, Slash is back on track. As raucous and edgy as his music, Slash sets the record straight and tells the real story as only Slash can.

`Brilliant stuff' **** News of the World

`A fitting monument... Slash's memoirs are an unexpectedly intoxicating cocktail of irresponsibility and dedication.' Independent on Sunday

Saul "Slash" Hudson was born in Hampstead in 1965. He moved with his family to Stoke before emigrating with his mother to LA when he was 11. Given his first guitar by his grandmother when he was 15, Slash went on to play in various local bands before teaming up with Izzy Stradlin and Axl Rose to form Guns N' Roses in 1985. He left in 1996 to form Slash's Snakepit and later Velvet Revolver.

He lives in LA with his wife and two sons.

GOR008730045
Slash: The Autobiography by Slash
Slash
Used - Like New
Paperback
HarperCollins Publishers
2008-05-05
480
0007257775
9780007257775
N/A
Book picture is for illustrative purposes only, actual binding, cover or edition may vary.
This is a used book - there is no escaping the fact it has been read by someone else and it will show signs of wear and previous use. Overall we expect it to be in very good condition, but if you are not entirely satisfied please get in touch with us.