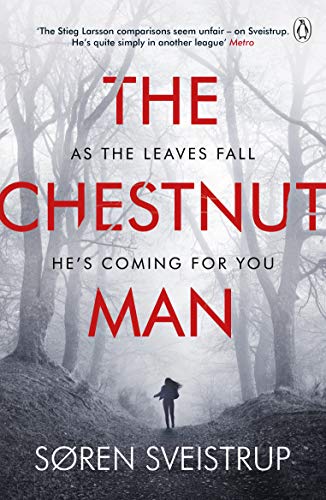 The Chestnut Man
by Soren Sveistrup

The Chestnut Man: The gripping debut novel from the writer of The Killing by Soren Sveistrup

'A full-throttle thriller in the tradition of classic Stieg Larsson, drenched in atmosphere and charged with adrenaline. I loved this book' A. J. Finn, author of The Woman In The Window

One October morning in a quiet suburb, the police make a terrible discovery.

A young woman is found brutally murdered with one of her hands missing.

Above her hangs a small doll made of chestnuts.

Examining the doll, Forensics are shocked to find a fingerprint belonging to a young girl, kidnapped and murdered a year ago.

Can a new killer be the key to an old crime?

'The Stieg Larsson comparisons seem unfair - on Sveistrup. He is quite simply in another league' Metro

'If you're pining for a dose of Jo Nesbo-style Scandi noir, The Chestnut Man should hit the spot' The Times

'Has success written all over it' Daily Express

'If you are one of the millions who enjoyed The Killing, you'll want to read the first novel by its creator' Guardian

Praise for The Killing

'TV of the absolute finest quality . . . the writing shines' Guardian

'The most talked-about, boxset-friendly cultural landmarks of the 21st century to date' Independent

More recently, Sveistrup wrote the screenplay for Jo Nesbo's The Snowman. Sveistrup obtained a Master in Literature and in History from the University of Copenhagen and studied at the Danish Film School. He has won countless prizes, including an Emmy for Nikolaj and Julie and a BAFTA for The Killing.

GOR010046098
The Chestnut Man: The gripping debut novel from the writer of The Killing by Soren Sveistrup
Soren Sveistrup
Used - Very Good
Paperback
Penguin Books Ltd
2019-09-05
512
1405939761
9781405939768
N/A
Book picture is for illustrative purposes only, actual binding, cover or edition may vary.
This is a used book - there is no escaping the fact it has been read by someone else and it will show signs of wear and previous use. Overall we expect it to be in very good condition, but if you are not entirely satisfied please get in touch with us.