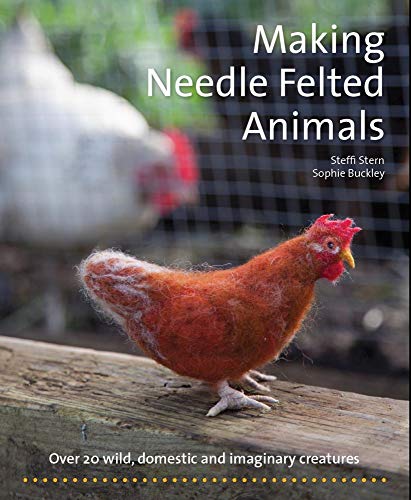 This book is an essential guide for anyone interested in the popular craft of needle-felting. Whether you are completely new to needle-felting or an experienced felter, this book has something to offer, from precise instructions to creative inspiration. Written by two authors, experienced in making and teaching crafts to students of all ages and abilities, instructions are easy to follow and include practical yet creative ideas to fix common mistakes. Projects arise from a genuine love of the natural world and animals, whether they be family pets ('Our Friend Dexter') or wild animals whose widespread ill-treatment has brought them into the limelight. Requiring no experience other than an interest in working and playing with wool, projects progressively build on skills throughout, and will transform you into an avid needle-felter in no time at all.

Steffi Stern owns Mother Goose craft shop and events space in Nailsworth, Gloucestershire. She was born in Germany and, encouraged by her mother's own passion for knitting and crochet, enjoyed the German handcraft tradition at a young age. Steffi is now the mother of four and continues to craft with and for her young children. Inspired by her love of good quality materials and commitment to making meaningful handcrafts, she founded Mother Goose in 2010. Sophie Buckley runs and leads workshops at Mother Goose in Nailsworth, and is primarily a crochet and needle-felt artist working in the Cotswolds area. She was brought up creating and went on to study contemporary crafts at Falmouth University College where she began specialising in textiles. She is an experienced workshop leader and has worked with adults of all abilities.

GOR007184465
Making Needle-Felted Animals: Over 20 Wild, Domestic and Imaginary Creatures by Steffi Stern
Steffi Stern
Crafts and Family Activities
Used - Very Good
Paperback
Hawthorn Press Ltd
2015-06-04
128
190735946X
9781907359460
N/A
Book picture is for illustrative purposes only, actual binding, cover or edition may vary.
This is a used book - there is no escaping the fact it has been read by someone else and it will show signs of wear and previous use. Overall we expect it to be in very good condition, but if you are not entirely satisfied please get in touch with us.