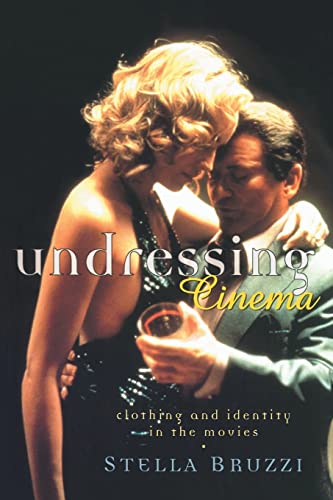 In Stock
24,99 $
Using case studies drawn from contemporary popular cinema to reassess ideas about costume and fashion in cinema, Bruzzi explores how clothes are key elements in the construction of cinematic identities and proposes new and dynamic links between cinema, fashion and costume history, gender, queer theory and psychoanalysis.
Very Good Good
Only 1 left

Undressing Cinema: Clothing and identity in the movies by Stella Bruzzi

From Audrey Hepburn in Givenchy, to sharp-suited gangsters in Tarantino movies, clothing is central to film. In Undressing Cinema, Stella Bruzzi explores how far from being mere accessories, clothes are key elements in the construction of cinematic identities, and she proposes new and dynamic links between cinema, fashion and costume history, gender, queer theory and psychoanalysis.
Bruzzi uses case studies drawn from contemporary popular cinema to reassess established ideas about costume and fashion in cinema, and to challenge conventional interpretations of how masculinity and femininity are constructed through clothing. Her wide-ranging study encompasses:
* haute couture in film and the rise of the movie fashion designer, from Givenchy to Gaultier
* the eroticism of period costume in films such as The Piano and The Age of Innocence
* clothing the modern femme fatale in Single White Female, Disclosure and The Last Seduction
* generic male chic in Goodfellas, Reservoir Dogs, and Leon
* pride, costume and masculinity in `Blaxploitation' films, Boyz `N The Hood and New Jack City
* drag and gender confusion in cinema, from the unerotic cross-dressing of Mrs Doubtfire to the eroticised ambiguity of Orlando.

"Surprisingly compelling, this one is for cinephiles and fashion fans alike."
-"Shift Magazine

GOR001249722
Undressing Cinema: Clothing and identity in the movies by Stella Bruzzi
Stella Bruzzi
Used - Very Good
Paperback
Taylor & Francis Ltd
1997-11-06
248
0415139570
9780415139571
N/A
Book picture is for illustrative purposes only, actual binding, cover or edition may vary.
This is a used book - there is no escaping the fact it has been read by someone else and it will show signs of wear and previous use. Overall we expect it to be in very good condition, but if you are not entirely satisfied please get in touch with us.