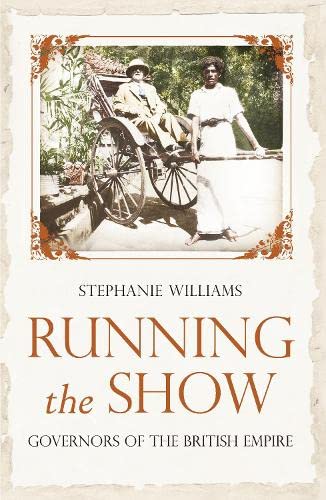 Running the Show
by Stephanie Williams

Used Price
$12.69
Free Shipping in the US
Made up of episodes from the lives of governors serving around the British Empire, this title presents a kaleidoscope of people, places and events - and stories of how, for better or worse, attempts were made to bring order to often chaotic situations.
Reviews:
Trustpilot
Like New Very Good

Running the Show: The Extraordinary Stories of the Men who Governed the British Empire by Stephanie Williams

From Sierra Leone to Fiji, Australia to Sri Lanka, Running the Show is a vivid portrait of empire and of men from another age, who formed so much of the world we live in today. Running the Show is the story of ordinary men, who in their way, were heroes. Made up of episodes from the lives of governors serving around the British Empire, it presents a kaleidoscope of people, places and events - and stories of how, for better or worse, attempts were made to bring order to often chaotic situations. Drawing on an astonishing cache of Colonial Office dispatches, private letters, diaries and memoirs, governors recall their strange experiences, parade their eccentricities and complain about dysentery as they plan new towns, build railways, create assemblies, draft laws, negotiate with tribesmen, set up schools and hospitals, and introduce sanitation systems in the farthest reaching corners of the world.

Consistently surprising, frequently stirring and often very funny... Williams is never dull. She has a fluent, engaging style and a finely tuned ear for an anecdote. She also pays proper attention to her subjects' romantic entanglements - a combination of hot climates, plentiful supplies of booze and boredom sounding the death knell for numerous colonial marriages...a delight * Daily Mail *
The range and richness of Running the Show defies reviewers' analysis. It is a wonderful performance whose prime effect is to demonstrate the vastness of the British imperial enterprise in all its blacks, whites and exceptions -- Jan Morris * The Times *
An amusing and lively book, stuffed full of anecdotes and interesting titbits -- Amanda Foreman * New Statesman *
Williams' research is exhaustive; her descriptions of the colonial life splendidly evocative. What emerges is a valuable picture of what empire-building was like -- David Evans * The Financial Times *
Her portraits of these men sparkle -- Christopher Sylvester * The Daily Express *
Admirably readable...gives a vivid picture of what it was like, in very varying circumstances and at different levels of responsibility, to be an instrument of that imperial endeavour in the heyday of Empire -- David Goodall * The Tablet *

Stephanie Williams is the author of three books of non-fiction. Born in Canada, the daughter of an army officer, Stephanie moved constantly across Canada, to Germany, England and the United States, before taking a degree in History at Wellesley College, Massachusetts. Since then she has lived in Hong Kong and travelled widely. She lives in north London.

GOR010335748
Running the Show: The Extraordinary Stories of the Men who Governed the British Empire by Stephanie Williams
Stephanie Williams
Used - Like New
Hardback
Penguin Books Ltd
2011-04-07
512
0670918040
9780670918041
N/A
Book picture is for illustrative purposes only, actual binding, cover or edition may vary.
This is a used book - there is no escaping the fact it has been read by someone else and it will show signs of wear and previous use. Overall we expect it to be in very good condition, but if you are not entirely satisfied please get in touch with us.