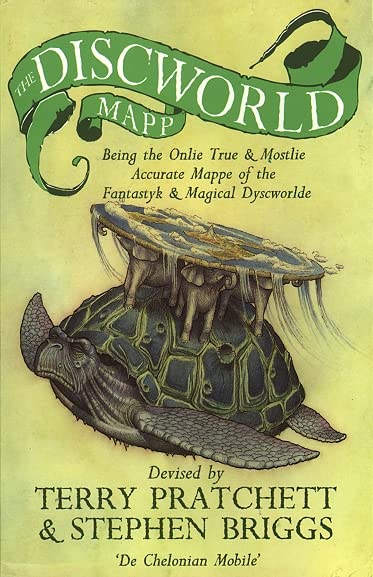 The Discworld Mapp
by Stephen Briggs

In Stock
8,99 $
By the author of "The Streets of Ankh-Morpork" and "The Discworld Companion". This pack contains a detailed map, in colour, of the Discworld, plus a booklet with lots of wacky facts and figures.
Very Good
Only 3 left

The Discworld Mapp by Stephen Briggs

They said it couldn't be done. Well, it has been done, proving them wrong once again. After years of research, cunningly contrived in as many minutes, the Discworld has its map. It takes full account of the historic and much documented expeditions of the Discworld's feted (or at least fated) explorers: General Sir Roderick Purdeigh, Lars Larsnephew, Llamedos Jones, Lady Alice Venturi, Ponce da Quirm and, of course, Venter Borass.

Now travellers on this circular world can see it all: from Klatch to the Ramtops, from Cori Celesti to the Circle Sea, from Genua to Bhangbhangduc. The great cities of Hunghung, Pseudopolis, Al Khali and, of course, Ankh-Morpork are placed with loving care upon this world which is carried through space by Great A'Tuin.

Terry Pratchett is fifty and lives behind a keyboard in Wiltshire, where he answers letters in a desperate attempt to find time to write. He used to grow carnivorous plants but now they've taken over the greenhouse and he avoids going in. He feels it may be time to get a life, since apparently they're terribly useful. Carpe Jugulum is the twenty-third novel in his phenomenally successful Discworld series.

Biography for Terry Pratchett
Terry Pratchett is one of the most popular authors writing today. He lives behind a keyboard in Wiltshire and says he 'doesn't want to get a life, because it feels as though he's trying to lead three already'. He was appointed OBE in 1998. He is the author of the phenomenally successful Discworld series and his trilogy for young readers, The Bromeliad, is scheduled to be adapted into a spectacular animated movie. His first Discworld novel for children, THE AMAZING MAURICE AND HIS EDUCATED RODENTS, was awarded the 2001 Carnegie Medal.

GOR001229343
The Discworld Mapp by Stephen Briggs
Stephen Briggs
Used - Very Good
Paperback
Transworld Publishers Ltd
1995-11-02
32
0552143243
9780552143240
N/A
Book picture is for illustrative purposes only, actual binding, cover or edition may vary.
This is a used book - there is no escaping the fact it has been read by someone else and it will show signs of wear and previous use. Overall we expect it to be in very good condition, but if you are not entirely satisfied please get in touch with us.