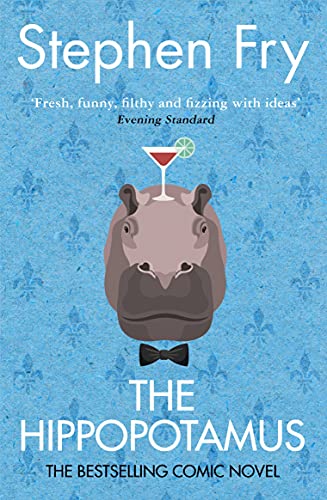 The Hippopotamus
by Stephen Fry

In Stock
$8.39
Ted Wallace is an old, sour, womanising, cantankerous, whisky-sodden beast of a failed poet and drama critic, but he has his faults too.
Very Good
8 in stock

The Hippopotamus by Stephen Fry

Ted Wallace is an old, sour, womanising, cantankerous, whisky-sodden beast of a failed poet and drama critic, but he has his faults too. Fired from his newspaper, months behind on his alimony payments and disgusted with a world that undervalues him, Ted seeks a few months repose and free drink at Swafford Hall, the country mansion of his old friend Lord Logan. But strange things have been going on at Swafford. Miracles. Healings. Phenomena beyond the comprehension of a mud-caked hippopotamus like Ted. With this funny and deliciously readable novel, Stephen Fry takes his place as one of the most talented comic novelists of his generation.

"My goodness what fruity language Fry uses! You can feel his enjoyment, and also the huge force of his desire to please you, as you read this" * Mail on Sunday *
"Fresh, filthy, funny and fizzing with ideas" * Evening Standard *
"One of the funniest people writing on either side of the Atlantic ... like a combination of Evelyn Waugh and Kingsley Amis but funnier than either" * Publishers Weekly *
"Deliciously wicked" * New York Times *

Stephen Fry was born in Hampstead in 1957 and, following a troubled adolescence, went on to study English Literature at Queen's College, Cambridge. As well as being the bestselling author of four novels, The Stars' Tennis Balls, Making History, The Hippopotamus, and The Liar, and two volumes of his autobiography, Fry played Peter in Peter's Friends, Wilde in the film Wilde, Jeeves in the television series Jeeves & Wooster and (a closely guarded show-business secret, this) Laurie in the television series Fry & Laurie. More recently, he presented Stephen Fry: The Secret Life of the Manic Depressive, his groundbreaking documentary on bipolar disorder, to huge critical acclaim. And his legions of fans tune in to watch him host the popular quiz show QI each week.

GOR001235515
The Hippopotamus by Stephen Fry
Stephen Fry
Used - Very Good
Paperback
Cornerstone
2004-08-05
416
0099457032
9780099457039
N/A
Book picture is for illustrative purposes only, actual binding, cover or edition may vary.
This is a used book - there is no escaping the fact it has been read by someone else and it will show signs of wear and previous use. Overall we expect it to be in very good condition, but if you are not entirely satisfied please get in touch with us.