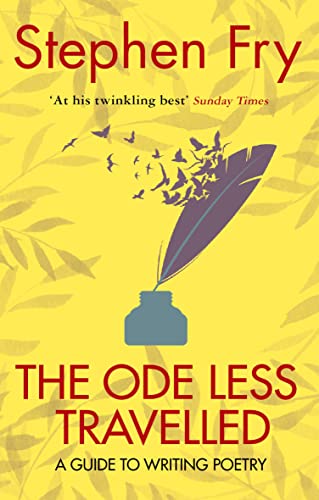 Used Price
$7,69
Free Shipping in the US
Stephen Fry believes that if you can speak and read English you can write poetry.Stephen, who has long written poems, and indeed has written long poems, for his own private pleasure, invites you to discover the incomparable delights of metre, rhyme and verse forms.
Reviews:
Trustpilot
Very Good Good

The Ode Less Travelled: Unlocking the Poet Within by Stephen Fry

Stephen Fry believes that if you can speak and read English you can write poetry. But it is no fun if you don't know where to start or have been led to believe that Anything Goes. Stephen, who has long written poems, and indeed has written long poems, for his own private pleasure, invites you to discover the incomparable delights of metre, rhyme and verse forms. Whether you want to write a Petrarchan sonnet for your lover's birthday, an epithalamion for your sister's wedding or a villanelle excoriating the government's housing policy, The Ode Less Travelled will give you the tools and the confidence to do so. Brimful of enjoyable exercises, witty insights and simple step-by-step advice, The Ode Less Travelled guides the reader towards mastery and confidence in the Mother of the Arts.

"Fry's extraordinary book is an idiots' guide to the writing of poetry, a primer, a tutorial with funny turns, an earnest textbook... You can't but marvel at Fry's easy familiarity with the rictameter and the rondeau redouble and applaud the energy of his evangelistic zeal" * Independent on Sunday *
"With his usual wit and occasional obscenity, he takes us through an array of metrical forms and poetic structures, talking to us like a cajoling hearty teacher" * Sunday Telegraph *
"Intelligent and informative, a worthy enterprise well executed" * Observer *
"A smart, sane and entertaining return to basics" * Daily Telegraph *
"Funny and instructive" * Spectator *

As well as being the bestselling author of four novels, The Stars' Tennis Balls, Making History, The Hippopotamus, and The Liar, and the first volume of his autobiography, Moab is My Washpot, Fry has played Peter in Peter's Friends, Wilde in the film Wilde, Jeeves in the television series Jeeves & Wooster and (a closely guarded show-business secret, this) Laurie in the television series Fry & Laurie.

GOR001578916
The Ode Less Travelled: Unlocking the Poet Within by Stephen Fry
Stephen Fry
Used - Very Good
Paperback
Cornerstone
2007-09-06
384
0099509342
9780099509349
N/A
Book picture is for illustrative purposes only, actual binding, cover or edition may vary.
This is a used book - there is no escaping the fact it has been read by someone else and it will show signs of wear and previous use. Overall we expect it to be in very good condition, but if you are not entirely satisfied please get in touch with us.