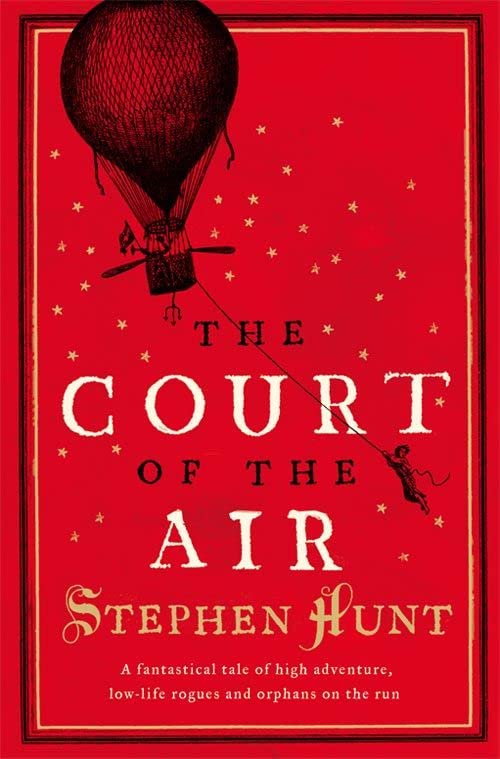 The Court of the Air
by Stephen Hunt

A hugely engaging adventure set in a Victorian-style world - a fantastical version of Dickens - that will appeal to fans of Susanna Clarke and Philip Pullman.

Two orphans are more than they seem. And one megalomaniac will stop at nothing to find them...

The Court of the Air Summary

The Court of the Air by Stephen Hunt

A hugely engaging adventure set in a Victorian-style world - a fantastical version of Dickens - that will appeal to fans of Susanna Clarke and Philip Pullman.

Two orphans are more than they seem. And one megalomaniac will stop at nothing to find them...

When Molly Templar witnesses a brutal murder at the brothel she has just been apprenticed to, her first instinct is to return to the poorhouse where she grew up. But there she finds her fellow orphans butchered, and it slowly dawns on her that she was in fact the real target of the attack. For Molly carries a secret deep in her blood, a secret that marks her out for destruction by enemies of the state. Soon Molly will find herself battling a grave threat to civilization which draws on an ancient power thought to have been quelled millennia ago.

Oliver Brooks has led a sheltered life in the home of his merchant uncle. But when he is framed for his only relative's murder he is forced to flee for his life. He is accompanied by Harry Stave, an agent of the Court of the Air - a shadowy organization independent of the government that acts as the final judiciary of the land, ensuring that order prevails. Chased across the country, Oliver finds himself in the company of thieves, outlaws and spies, and gradually learns more about the secret that has blighted his life, but which may also offer him the power to avert the coming catastrophe.

Their enemies are ruthless and myriad, but Molly and Oliver are joined by indomitable friends in this endlessly inventive tale full of drama, intrigue and adventure.

The Court of the Air Reviews

`An inventive, ambitious work, full of wonders and marvels' Lisa Tuttle, The Times

`The characters are convincing and colourful, but the real achievement is the setting, a hellish take on Victorian London ... the depth and complexity of Hunt's vision makes it compulsive reading for all ages' Guardian

`Wonderfully assured ... Hunt knows what his audience like and gives it to them with a sardonic wit and carefully developed tension' Time Out

`Like a magpie, Stephen Hunt has plucked colourful events from history and politics and used them for inspiration ... Hunts tells his full-blooded tale with lip-smacking relish, revealing a vivid, often gruesome imagination ... T'he Court of the Air' brims with originality and, from the first, its chase-filled plot never lets up' Starburst

Stephen Hunt set up one of the first science fiction and fantasy websites, www.SFcrowsnest.com, in 1994. Today the site has 340,000 readers a month. Stephen Hunt is in his thirties and lives with his wife and children in Surrey.

GOR001234112
The Court of the Air by Stephen Hunt
Stephen Hunt
Used - Very Good
Paperback
HarperCollins Publishers
2007-09-03
588
0007232187
9780007232185
N/A
Book picture is for illustrative purposes only, actual binding, cover or edition may vary.
This is a used book - there is no escaping the fact it has been read by someone else and it will show signs of wear and previous use. Overall we expect it to be in very good condition, but if you are not entirely satisfied please get in touch with us.