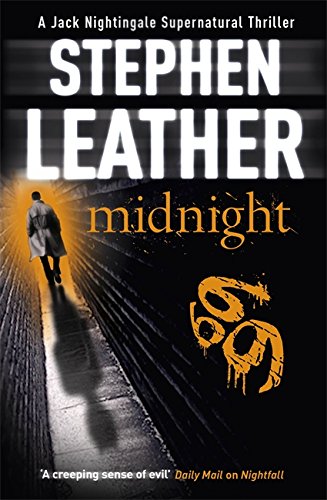 Used Price
$10.39
Free Shipping in the US
The second in the exhilarating new series by Stephen Leather that began with NIGHTFALL: of-the-minute thrillers with a supernatural twist
Reviews:
Trustpilot
Like New Very Good

Jack Nightingale found it hard enough to save lives when he was a cop. Now he needs to save a soul - his sister's. But to save her he has to find her and they've been separated since birth.

When everyone Jack talks to about his sister dies horribly, he realises that someone, or something, is determined to keep them apart.

If he's going to save his sister, he's going to have to do what he does best - negotiate. But any negotiation with the forces of darkness comes at a terrible price. And first Jack must ask himself the question: is every soul worth saving?

'Wickedly entertaining ... A darkly comic, but creepy, and deftly-written delight from a top-rank thriller writer.' -- Peterborough Evening Telegraph 'Another great thriller from Stephen Leather but this time with a devilish twist!' -- James Herbert on NIGHTFALL 'A wicked read' -- Anthony Horowitz on NIGHTFALL 'Suffused with mysterious pentagrams, not to mention a creeping sense of evil, I suspect that down-to-earth Nightingale is a man we'll hear more of' -- Daily Mail on NIGHTFALL 'Dark and exhilarating, you'd better keep the lights on when you're reading it' -- Candis on NIGHTFALL Praise for Stephen Leather's Dan Shepherd novels -- : 'This is an aggressively topical novel but a genuinely thrilling one, too.' -- Daily Telegraph 'As tough as British thrillers get ... gripping' -- Irish Independent

Stephen Leather is one of the UK's most successful thriller writers. Before becoming a novelist he was a journalist for more than ten years on newspapers such as The Times, the Daily Mail and the South China Morning Post in Hong Kong. He began writing full time in 1992. His bestsellers have been translated into more than ten languages. He has also written for television shows such as London's Burning, The Knock and the BBC's Murder in Mind series and two of his books, The Stretch and The Bombmaker, were filmed for TV. You can find out more from his website, www.stephenleather.com.

GOR010713846
Midnight: The 2nd Jack Nightingale Supernatural Thriller by Stephen Leather
Stephen Leather
Used - Like New
Paperback
Hodder & Stoughton
2011-01-11
480
1444700677
9781444700671
N/A
Book picture is for illustrative purposes only, actual binding, cover or edition may vary.
The book has been read, but looks new. The book cover has no visible wear, and the dust jacket is included if applicable. No missing or damaged pages, no tears, possible very minimal creasing, no underlining or highlighting of text, and no writing in the margins.