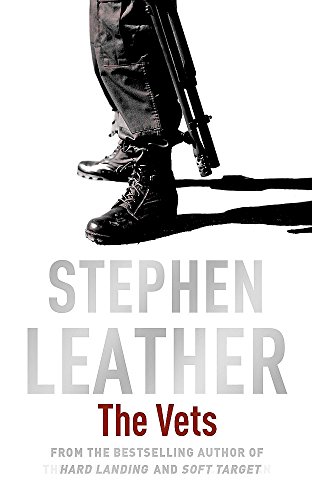 The Vets
by Stephen Leather

The Vets by Stephen Leather

Hong Kong. The British administration is preparing to hand the capitalist colony back to Communist China with the minimum of fuss.

Colonel Joel Tyler, however, has other plans for the British colony - plans that involve four Vietnam War veterans and a spectacular mission making use of their unique skills.

But while the vets are preparing to take the country by storm, their paymaster, Anthony Chung, puts the final touches to an audacious betrayal. The future of Hong Kong is at stake . . .

'Action and scalpel-sharp suspense ... the book has all the ingredients for a successful blockbuster' -- Daily Telegraph 'Exciting stuff with plenty of heart-palpitating action gingered up by mystery and intrigue ... Leather is an intelligent thriller writer' -- Daily Mail on THE TUNNEL RATS

GOR001245604
The Vets by Stephen Leather
Stephen Leather
Used - Very Good
Paperback
Hodder & Stoughton General Division
1994-02-01
576
0340597704
9780340597705
N/A
Book picture is for illustrative purposes only, actual binding, cover or edition may vary.
This is a used book - there is no escaping the fact it has been read by someone else and it will show signs of wear and previous use. Overall we expect it to be in very good condition, but if you are not entirely satisfied please get in touch with us.