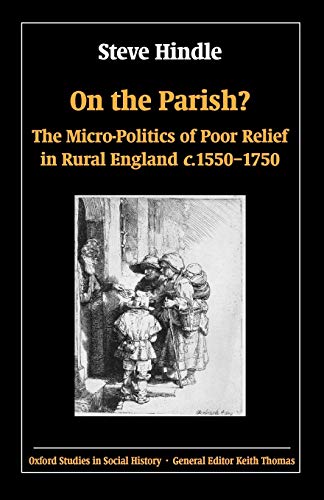 On the Parish?
by Steve Hindle (Professor of History, University of Warwick)

Used Price
$53.99
Free Shipping in the US
On the Parish? is a study of the experience of poor relief in the rural parishes of early modern England. It explores the relationships of paupers not only to the parish officers who administered the Elizabethan poor laws but also to their kinfolk and neighbours who continued to provide extensive networks of informal support.
Reviews:
Trustpilot
Very Good

On the Parish? Summary

On the Parish?: The Micro-Politics of Poor Relief in Rural England 1550-1750 by Steve Hindle (Professor of History, University of Warwick)

On the Parish? is a study of the negotiations which took place over the allocation of poor relief in the rural communities of sixteenth, seventeenth and early eighteenth century England. It analyses the relationships between the enduring systems of informal support through which the labouring poor made attempts to survive for themselves; the expanding range of endowed charity encouraged by the late sixteenth century statutes for charitable uses; and the developing system of parish relief co-ordinated under the Elizabethan poor laws. Based on exhaustive research in the archives of the trustees who administered endowments, of the overseers of the poor who assessed rates and distributed pensions, of the magistrates who audited and co-ordinated relief and of the royal judges who played such an important role in interpreting the Elizabethan statutes, the book reconstructs the hierarchy of provision of relief as it was experienced among the poor themselves. It argues that receipt of a parish pension was only the final (and by no means the inevitable) stage in a protracted process of negotiation between prospective pensioners (or 'collectioners', as they came to be called) and parish officers. This running theme is itself reflected in a series of chapters whose sequence seeks to mirror the experience of indigence, moving gradually (and by stages) from the networks of care provided by kin and neighbours into the bureaucracy of the parish relief system, emphasising in particular the importance of labour discipline in the thinking of parish officers. By illuminating the workings of a relief system in which notions of entitlement were both under-developed and contested, On the Parish? provides historical perspective for contemporary debates about the rights and obligations of the poor in a society where the dismantling of the welfare state implies that there is, once again, no right to relief from cradle to grave.

Customer Reviews - On the Parish?

On the Parish? Reviews

Review from previous edition '...a bold and stimulating book of enduring importance...a very notable achievement.' - * R.W. Hoyle, English Historical Review *
'On the Parish is the best account of the workings of the old Poor Law in the two centuries before the crisis of the late 18th century. ' * Martin Daunton, THES *
'A considerable achievement, eloquent and challenging.' * TLS *

GOR009699885
On the Parish?: The Micro-Politics of Poor Relief in Rural England 1550-1750 by Steve Hindle (Professor of History, University of Warwick)
Steve Hindle (Professor of History, University of Warwick)
Oxford Studies in Social History
Used - Very Good
Paperback
Oxford University Press
2009-02-01
536
0199560498
9780199560493
N/A
Book picture is for illustrative purposes only, actual binding, cover or edition may vary.
This is a used book - there is no escaping the fact it has been read by someone else and it will show signs of wear and previous use. Overall we expect it to be in very good condition, but if you are not entirely satisfied please get in touch with us.