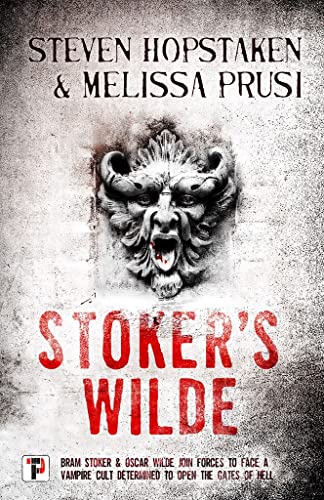 Used Price
$9.19
Free Shipping in the US
Years before either becomes a literary legend, Bram Stoker and Oscar Wilde must overcome their disdain for one another to battle the Black Bishop, a madman wielding supernatural forces to bend the British Empire to his will.
Reviews:
Trustpilot
Very Good Good

"Historical details and supernatural monsters abound, but it is the odd couple of Wilde and Stoker, with their diametrically opposed personalities and interesting quirks, that drives this story. Pass this volume on to readers who are hungry for more historical stories with a supernatural frame." - Booklist
Longlisted for The Guardian's Not the Booker Prize 2019.
Years before either becomes a literary legend, Bram Stoker and Oscar Wilde must overcome their disdain for one another to battle the Black Bishop, a mysterious madman wielding supernatural forces to bend the British Empire to his will. With the help of a European vampire expert, a spirited actress and an American businessman, our heroes fight werewolves, vampires and the chains of Victorian morality. The fight will take them through dark forests in Ireland, the upper-class London theater world and Stonehenge, where Bram and Oscar must stop a vampire cult from opening the gates of Hell.
FLAME TREE PRESS is the new fiction imprint of Flame Tree Publishing. Launched in 2018 the list brings together brilliant new authors and the more established; the award winners, and exciting, original voices.

"Hopstaken and Prusi have done their homework and produced a pleasing period penny dreadful." - Publishers Weekly "Stoker's Wilde is immensely entertaining and engrossing...this novel was an utter delight." - The Haunted Reading Room "Stoker's Wilde is a brilliant book, its clear the authors really know their subject matter." S. J. Budd "Historical details and supernatural monsters abound, but it is the odd couple of Wilde and Stoker, with their diametrically opposed personalities and interesting quirks, that drives this story. Pass this volume on to readers who are hungry for more historical stories with a supernatural frame." Booklist "This is a great suggestion for people who like historical fiction with real characters and supernatural elements." - Becky Spratford, RA for All "A fun throwback to classic horror, playing off of Bram Stoker's Dracula and Oscar Wilde's The Picture of Dorian Gray, this tale stars fictionalized versions of both Stoker and Wilde, brought together through circumstance to hunt the undead throughout England [...] This husband-and-wife writing team offer a solid choice for fans of vampire lore and atmospheric, historical horror." - Library Journal "A piece of work that is more original and creative than any novel I have read in years."- High Fever Books "I absolutely loved it, it's thrilling, exciting and funny as hell-it's a rollercoaster ride through Victorian values, secret societies and deep, dark secrets...there is nothing that I did not love about it! Roll on book 2!" - Rachel Read it "This novel is a sweet mix of supernatural horror and Victorian social commentary [...] Very enjoyable read! A dash of the truth mixed with a bit of the fantastical smothered in a nice dose of classic monster horror -- very entertaining book! - My Interdimensional Chaos "This story provides horror, adventure and humour throughout, the need to protect the human race against the evil plans that threaten them." - Lacy Ace Book Reviews "This is a must-read for Horror lovers." - Terror Tree

Steven Hopstaken was born in Grand Rapids, Michigan, where he spent his formative years watching and reading science fiction and horror. He has a degree in journalism from Northern Michigan University and spends his free time traveling; writing screenplays, short stories and novels; and practicing photography. Melissa Prusi was born and raised in the Upper Peninsula of Michigan (often mistaken for Canada), and studied video and film production at Northern Michigan University and the University of Michigan. She's been a video editor, a semi-professional film reviewer, a three-time champion on the quiz show Jeopardy!, and a Guinness world record holder (1990 edition, for directing the longest live television show). They met in a college screenwriting class and married three years later. They spent a brief time in Los Angeles, where they both worked for Warner Bros. television. They eventually ended up in Minneapolis, Minnesota, where they love the arts scene but dread the winters. While they both currently make a living as website content managers, they have sold two screenplays, which have been lost to development hell. They've indulged their fascination with Bram Stoker and Oscar Wilde through trips to Dublin and London to research their lives and visit sites mentioned in Stoker's Wilde. They live in St. Louis Park, Minnesota with their two cats. If they're not writing, you can usually find them at a movie, local theater production, improv show or pub quiz. This is their first novel.
Awards:
Longlisted for The Guardian's Not the Booker Prize 2019

GOR010765467
Stoker's Wilde by Steven Hopstaken
Steven Hopstaken
Fiction Without Frontiers
Used - Very Good
Paperback
Flame Tree Publishing
2019-05-30
384
1787581721
9781787581722
N/A
Book picture is for illustrative purposes only, actual binding, cover or edition may vary.
This is a used book - there is no escaping the fact it has been read by someone else and it will show signs of wear and previous use. Overall we expect it to be in very good condition, but if you are not entirely satisfied please get in touch with us.