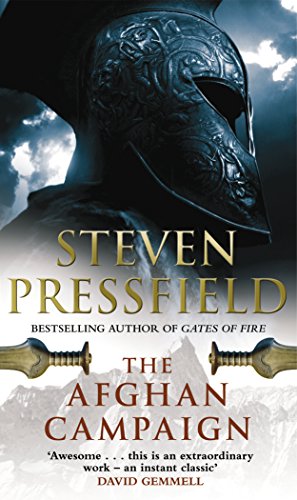 The Afghan Campaign
by Steven Pressfield

The Afghan Campaign by Steven Pressfield

____________________ 'Pressfield's talent is awesome . . . an extraordinary work, an instant classic' David Gemmell ____________________ Alexander the Great's campaign in the Afghan kingdoms began in the summer of 330BC. It lasted for three brutal years and proved the most bloody and ruthless he and his army ever fought... Among the ranks of Macedonian infantry is Matthias. The youngest of three brothers, he is eager to prove himself, but as he joins the front-line, he comes to realise that warfare has changed. The Macedonians face a new kind of enemy, and must learn to fight a new kind of war. Experiencing fear, euphoria, horror and shame, Matthias and his comrades undergo a rite of passage as they, soldiers of a Western force whose code is secular and humanist, confront a proud Eastern warrior people who possess a fervent willingness to die for their cause. Just to survive, Alexander's men must shake off the trappings of 'civilization' and adopt the same unorthodox and barbaric tactics as their foe - but at what cost? ____________________ Set against the harsh, unrelenting Afghan landscape, this thrilling novel reveals a profound understanding of the hopes and fears of men in battle and has important things to say about the nature of wars past...and present.

Steven Pressfield is the author of the classic historical bestsellers Gates of Fire, Tides of War, Last of the Amazons and Alexander: The Virtues of War. He lives in California.

GOR001234596
The Afghan Campaign by Steven Pressfield
Steven Pressfield
Used - Very Good
Paperback
Transworld Publishers Ltd
2007-07-14
464
0553817973
9780553817973
N/A
Book picture is for illustrative purposes only, actual binding, cover or edition may vary.
This is a used book - there is no escaping the fact it has been read by someone else and it will show signs of wear and previous use. Overall we expect it to be in very good condition, but if you are not entirely satisfied please get in touch with us.