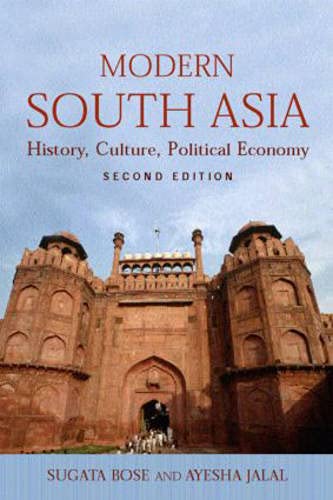 In Stock
$13.39
After sketching the pre-modern history of the Indian sub-continent, this title concentrates on the last three centuries, offering an historical understanding of the politics, cultures and economies that shape the lives of more than a fifth of humanity.
Like New Very Good
Only 1 left

Jointly written by two leading Indian and Pakistani historians, Modern South Asia offers a rare depth of historical understanding of the politics, cultures and economies that shape the lives of more than a fifth of humanity. After sketching the pre-modern history of the sub-continent, the book concentrates on the last three centuries.
This new second edition has been updated throughout to take account of recent historical research. It includes an expanded section on post-independence with a completely new chapter on the period from 1991 to the present and a chapter on the last millennium in subcontinental history. There is a new chronology of key events.

GOR010629501
Modern South Asia: History, Culture, Political Economy by Sugata Bose (Harvard University, USA)
Sugata Bose (Harvard University, USA)
Used - Like New
Paperback
Taylor & Francis Ltd
2003-11-27
272
0415307872
9780415307871
N/A
Book picture is for illustrative purposes only, actual binding, cover or edition may vary.
The book has been read, but looks new. The book cover has no visible wear, and the dust jacket is included if applicable. No missing or damaged pages, no tears, possible very minimal creasing, no underlining or highlighting of text, and no writing in the margins.