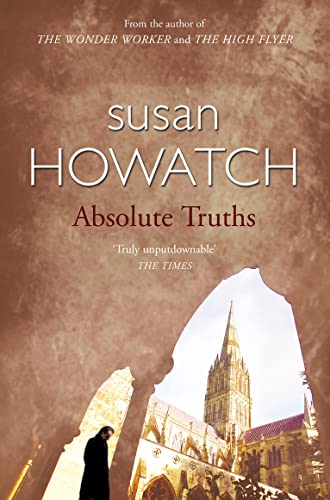 Charles Ashworth is privileged, pampered and pleased with himself. As Bishop of Starbridge in 1965 he 'purrs along as effortlessly as a well-tuned Rolls-Royce' while he proclaims his famous 'absolute truths' to a society which he sees - with rage and revulsion - as increasingly immoral and disordered. But then a catastrophe tears his life apart and confronts him with the real absolute truths, truths which so shatter him that he finds himself stripped of his pride and struggling for survival.
Grappling with the revelation that he has failed his wife, short-changed one son and distorted the personality of the other, Charles's guilt steadily drives him into the immoral and disordered life he has condemned so violently in others. Fighting against the threat of complete breakdown, he then embarks on a quest to rebuild not only his private life but his professional life, a quest which leads him to a final battle with his old enemy Dean Aysgarth in the shadow of Starbridge Cathedral.

'I read on, wriggling on a hypnotic storyteller's hook' Daily Telegraph

'Every bit as good as Trollope' Liverpool Echo

'A tour de force... Susan Howatch has been likened to a twentieth-century version of Trollope. To make such a comparison is to fail to do her justice' Church of England Newspaper

'Riveting... extremely moving and often very funny... She is a deft storyteller, and her writing has depth, grace and pace' Sunday Times

GOR010499587
Absolute Truths by Susan Howatch
Susan Howatch
Used - Like New
Paperback
HarperCollins Publishers
1996-07-23
672
0006496881
9780006496885
N/A
Book picture is for illustrative purposes only, actual binding, cover or edition may vary.
This is a used book - there is no escaping the fact it has been read by someone else and it will show signs of wear and previous use. Overall we expect it to be in very good condition, but if you are not entirely satisfied please get in touch with us.