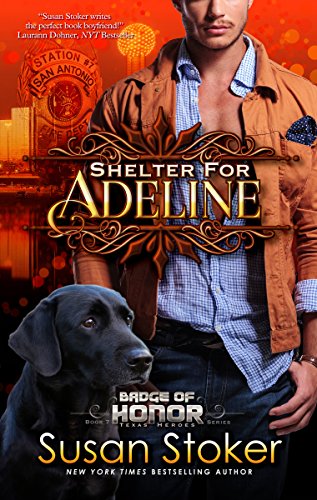 Shelter for Adeline
by Susan Stoker

Saddled with a job she hates and a detestable boss she likes even less, Adeline Reynolds could use a break. It doesn't look like she'll get one today. Her service dog, Coco, is alerting her she's about to have an epileptic seizure-and her frustrated blind date has left her to deal on her own. Enter firefighter Dean Christopherson, who escorts her to the nearby fire station, where she can suffer through her ordeal safe from injury and prying eyes.

Dean-known as "Crash" to his friends-didn't expect to find The One in a diner during his lunch break, but he's blindsided by the beautiful, brave Adeline. She brings out his every protective instinct-along with the carnal ones. As they get to know each other, Dean's feelings for Adeline grow fast, as does his irritation with her boss, whose behavior is suspicious at best.

As much as he wants to protect Adeline from the world, Crash has to tread carefully. His overprotectiveness could push her away...and leave her vulnerable to a man whose obsession has reached the boiling point.

"These books should come with a warning label. Once you start you can't stop until you've read them all." -Sharon Hamilton, New York Times Bestselling Author

New York Times, USA Today, and Wall Street Journal bestselling author Susan Stoker has a heart as big as the state of Texas where she lives, but this all American girl has also spent the last fourteen years living in Missouri, California, Colorado, and Indiana. She's married to a retired Army man who now gets to follow her around the country. She debuted her first series in 2014 and quickly followed that up with the SEAL of Protection Series, which solidified her love of writing and creating stories readers can get lost in. Connect with her at www.StokerAces.com ** For text alerts, text STOKER to 24587

GOR010768281
Shelter for Adeline: Badge of Honor: Texas Heroes, Book 7 by Susan Stoker
Susan Stoker
Badge of Honor: Texas Heroes
Used - Very Good
Paperback
Diversion Books
2017-01-26
394
1682306011
9781682306017
N/A
Book picture is for illustrative purposes only, actual binding, cover or edition may vary.
This is a used book - there is no escaping the fact it has been read by someone else and it will show signs of wear and previous use. Overall we expect it to be in very good condition, but if you are not entirely satisfied please get in touch with us.