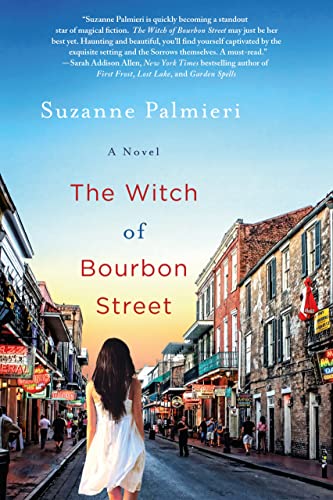 The Witch of Bourbon Street
by Suzanne Palmieri

Used Price
$18.99
Free Shipping in the US
When Frances Sorrow returns home to the now dilapidated Sorrow Estate to restore her birth right, she finds herself haunted by a 100-year-old mystery only she can unravel.
Reviews:
Trustpilot
Good

The Witch of Bourbon Street Summary

The Witch of Bourbon Street by Suzanne Palmieri

When Frances Sorrow returns home to the now dilapidated Sorrow Estate to restore her birth right, she finds herself haunted by a 100-year-old mystery only she can unravel. Set amidst the charming chaos of the French Quarter and remote bayous of Tivoli Parish, Louisiana, Suzanne Palmieri's The Witch of Bourdon Street weaves an unforgettable table of mystery and magic. Situated deep in the bayou is the formerly opulent Sorrow Estate. Once home to a magical family, the Sorrows, it now lays in ruins, uninhabited since a series of murders in 1902 shocked the entire community. When Frances Green Sorrow is born, the family is on the brink of obscurity and the last remaining Sorrows cling to the hope that she is the one who will finally resurrect the glory of what once was. However, Frances has no wish to be the family's saviour. Disillusioned, she marries young, attempting an "ordinary life," and has a son, Jack. When her marriage fails and she loses custody of her boy, she runs away to live a quiet life on the dilapidated Sorrow Estate, where she practices solitary magic amid ghosts and gardens. But when Jack disappears, she is forced to rejoin the world she left behind and solve the century-old murder that casts a long shadow over Tivoli Parish and its inhabitants in order to find her son.

The Witch of Bourbon Street Reviews

"Part ghost story, part mystery, Palmieri's latest is a tale about the power of love, forgiveness and family legacies that is both haunting and uplifting... each scene is drenched in atmospheric details, making the eccentric chaos of Bourbon Street and the damp mysteries of the bayou as alive as any of the cleverly named supporting cast. The use of multiple voices, including historical documents, will immerse readers in the world of the story and the eerie legacy of one remarkable and powerful family." --Romantic Times

"[Palmieri's] strength lies in the fullness of her vision, immersing readers in the heat and noise of southern Louisiana. Fans of Paula Brackston and M. J. Rose will enjoy this story of redemption, self-preservation, and the power of shared history." --Booklist

"Suzanne Palmieri is quickly becoming a standout star of magical fiction. The Witch of Bourbon Street may just be her best yet. Haunting and beautiful, you'll find yourself captivated by the exquisite setting, and the Sorrows themselves. A must read." --Sarah Addison Allen, New York Times bestselling author of First Frost, Lost Lake, and Garden Spells on The Witch of Bourbon Street

"Few writers can create the richly atmospheric worlds of Suzanne Palmieri's fiction or bring to life such compelling characters. Caught in the ghostly half-life between their own bad choices and their tragic history, the Sorrows inhabit a mystical, mysterious world where time is distorted and redemption becomes imperative. A family saga that will linger with readers like the lost souls of the bayou. Palmieri's best so far." --Brunonia Barry, New York Times bestselling author of The Lace Reader and The Map of True Places on The Witch of Bourbon Street

"About the lies we tell, the love we struggle for, and the way we find our way back to our rightful place in the world, Palmieri's book is a stunner." --Caroline Leavitt, New York Times bestselling author of Pictures of You and Is This Tomorrow on The Witch of Belladonna Bay

"Ms. Palmieri's authentic dialogue, and ability to paint a family in crisis, is both charming and layered. If you're a lover of Southern fiction, magic in its many forms, and the kind of storytelling that keeps you turning the pages, you've come to the right place, y'all." --Lesley Kagen, New York Times bestselling author of Whistling in the Dark on The Witch of Belladonna Bay

"Magic weaves its way through this beguiling southern gothic, swirling from the moss-laden trees around the Big House through the misty and menacing Belladonna Bay, and settling into the hearts of Bronwyn and her niece, Byrd, whose Strange Ways most people just don't understand. Reminiscent of Sarah Addison Allen's Garden Spells, this bewitching tale of ghostly mystery, love and family ties will enchant you from the very first page and linger in the air around you long after the last." --Wendy Webb, bestselling author of The Fate of Mercy Alban on The Witch of Belladonna Bay

"Suzanne Palmieri has crafted a riveting tale that will keep you up late at night guessing what will happen next. It is a story that will intrigue both male and female readers. Guys, don't let this one slip past you." --Jason Mott, New York Times bestselling author of The Returned on The Witch of Belladonna Bay

"Palmieri's enthralling debut will make adult readers nostalgic for beloved books from their childhoods. Abundant with secrets, hidden passageways, magic and several enchanting mysteries, it'll keep you on the edge of your seat until the end. The magic and witchcraft elements are subtle, enhancing the over-all effect of this clever, beautiful novel." --RT Bookclub on The Witch of Little Italy

"In her debut novel, Palmieri has combined romance and mystery, folklore and psychology to create a jigsaw puzzle of family secrets and tragedies, losses and loves, guilt and forgiveness....Entertaining." --Kirkus on The Witch of Little Italy

"Charming and enchanting--The Witch of Little Italy drew me in from page one. A magical story of family, secrets, loss and rediscovery written in beautiful prose and sprinkled with effervescent characters you won't soon forget. Palmieri nimbly blends the past and present to concoct a delicious spell of a story that will appeal to fans of Sarah Addison Allen and other fabulously entertaining novels." --Karen White, New York Times bestselling author of The Beach Trees on The Witch of Little Italy

"I was utterly enchanted from the first page, and found myself continually marveling over the effortless grace with which this story unfolded. The Witch of Little Italy is a complex, richly textured tale that practically sings with magic, and I know Suzanne Palmieri has a long and brilliant career ahead of her. In a word: I was charmed." --Donna Ball, award winning author of The Lady Bug Farm series on The Witch of Little Italy

"A mystical family secret hidden in a spicy Italian stew." --Kelly Simmons, author of Standing Still and The Bird House on The Witch of Little Italy

SUZANNE PALMIERI is the author of The Witch of Little Italy and The Witch of Belladonna Bay. She also writes as Suzanne Hayes and lives with her husband and three daughters in North Branford, Connecticut.