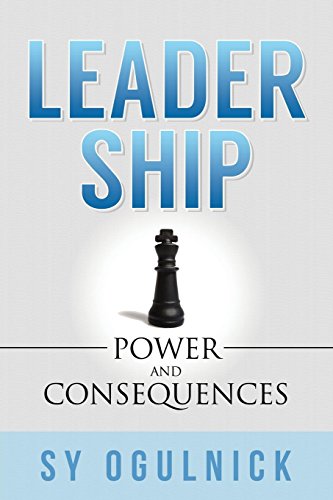 If you are a leader or aspire to leadership over others you must read "Leaders, Power & Consequences." It clearly exposes the influences a leader has with people who are close and important to the leader.

The leader is the person who holds the true power, that is, "the buck stops with them." It is not underlings who act on behalf of another who dictates their actions. They are not the true power, and no one is long deceived.

Where do problems in relationships, trivial or significant, not exist? The answer to resolving the problem is likely found where the power is located. Who are the true leaders, what are their expectations and how well do they communicate with those they lead? And, how well and candidly do those significant to the leader communicate directly back to the leader? This is where trust, safety and respect play a huge role in how the relationship plays out and either grows, mutually, or is destructive, mutually.

Most leaders tend to communicate badly, have unspoken or inflexible expectations towards those they lead and blame others for what is the leader's failings. "Leaders, Power & Consequences" confronts this problem of leadership directly and clearly by using Sy Ogulnick's personally experienced stories. He clearly describes the path leaders must take if they are to personally grow, to understand themselves better, and in the process to contribute to the growth of those they lead.

When authentic communication takes place between those in power and those immediately at the effect of this power, trust, safety and respect are felt by each. This must be found in the environment or Genuine Dialogue between them is impossible and will not, even at the point of a gun, take place. And it is the leaders who are primarily responsible for the creation of the environment. Words do not make it so, but action (behavior of the leaders) does.

The path laid out in "Leaders, Power & Consequences" leads to facilitating problem-solving, creativity, innovation and a sense of mutual ownership amongst people to the degree that most leaders can only dream of.

Sy Ogulnick received a BA from UCLA, Teacher's Credential from Los Angeles Board of Education and completed phase I (Master's portion) in a Doctor of Behavioral Science program at California Coast University. Sy leased and operated a summer day camp in LA. He and his wife then purchased virgin wilderness land in Northern CA, where they built and operated a coed summer camp. They moved to Las Vegas, NV, and purchased, built and operated a community children's program for families staying in a major resort casino in Las Vegas. They have created programs for children nationwide that employed many people and in the process developed successful training programs for personnel. This led Sy to lecture on how to train staff and the creating of community within the workplace. Sy was then invited to speak at professional conferences on how best to hire and train employees, which led to his becoming a consultant in the art of improving relationships in a work environment and eventually to his epiphany that "Leaders are the primary problem and the answer to the personnel issues that arise in the workplace." Sy has written numerous papers on the subject of interpersonal relationships, leadership and power. He has lectured throughout the United States, has been interviewed by the media and has appeared on many radio and TV talk shows.

GOR009518373
Leadership: Power and Consequences by Sy Ogulnick
Sy Ogulnick
Used - Very Good
Paperback
Morgan James Publishing llc
2015-03-03
1630473103
9781630473105
N/A
Book picture is for illustrative purposes only, actual binding, cover or edition may vary.
This is a used book - there is no escaping the fact it has been read by someone else and it will show signs of wear and previous use. Overall we expect it to be in very good condition, but if you are not entirely satisfied please get in touch with us.