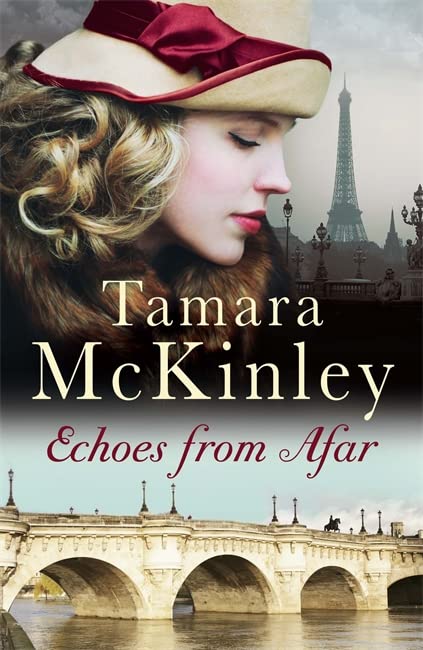 Echoes from Afar
by Tamara McKinley

Echoes from Afar by Tamara McKinley

A powerful story of love and loss from the beloved internationally bestselling author, Tamara McKinley, who also writes as Sunday Times bestseller Ellie Dean. For fans of Lesley Pearse and Susan Lewis.

So this is Paris, she thought in awe. Spread out before her beneath a clear blue sky, it was like a precious gift after the smog and filth of London. No wonder it was called the city of love . . .
After a spiteful rumour ruins her career in London, Annabelle Blake must travel to Paris to start afresh. There she makes the acquaintance of Etienne and Henri - one a poet, the other a painter - both charming, talented and handsome. They spend their days flirting and drinking with the city's artistes and Bohemians, and soon Annabelle too is swept up in the exotic and exhilarating world of 1930s Paris. But as ever more young people are drawn to the fight against Fascism in Spain, Annabelle must wake from the dream and confront the reality of war. A lifetime later, gifted artist Eugenie Ashton falls in love with Paris the moment she sets foot outside the Gare de Lyon. Like her mother Annabelle before her, the artistic delights of the city are a bright new world to her: but Eugenie will soon find that in its shadows are hidden the secrets of her family's past.

An elegant affair from the get-go that is in part a love letter to Paris. McKinley voices her cast effectively, and the positioning of a romantic and spiritual diorama to a backdrop of a fraught Europe in political upheaval is palpable * Irish Sunday Independent *
An entertaining tale of love and loss * France Magazine *
Dark secrets from the past lie dormant beneath the bright lights of Paris in an enthralling cross-generational story from popular author Tamara McKinley. A warm and welcoming read * Lancashire Evening Post *

Tamara McKinley is the author of more than eleven novels. She was born in Tasmania, but now lives in Sussex and Cornwall and writes full time. Her novels are both contemporary and historical, following the lives of Australian pioneers and those who came after them.

GOR007173937
Echoes from Afar by Tamara McKinley
Tamara McKinley
Used - Very Good
Paperback
Quercus Publishing
2016-01-28
448
1784296961
9781784296964
N/A
Book picture is for illustrative purposes only, actual binding, cover or edition may vary.
This is a used book - there is no escaping the fact it has been read by someone else and it will show signs of wear and previous use. Overall we expect it to be in very good condition, but if you are not entirely satisfied please get in touch with us.