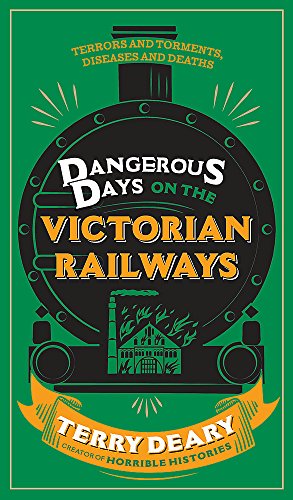 Dangerous Days on the Victorian Railways
by Terry Deary

Used Price
$7.69
Free Shipping in the US
The terrible truth behind the history of our railways by Terry Deary, creater of Horrible Histories. Strictly for grown-ups!
Reviews:
Trustpilot
Very Good

The Victorians risked more than just delays when boarding a steam train . . .

Victorian inventors certainly didn't lack steam, but while they squabbled over who deserved the title of 'The Father of the Locomotive' and enjoyed their fame and fortune, safety on the rails was not their priority. Brakes were seen as a needless luxury and boilers had an inconvenient tendency to overheat and explode, and in turn, blow up anyone in reach.

Often recognised as having revolutionised travel and industrial Britain, Victorian railways were perilous. Disease, accidents and disasters accounted for thousands of deaths and many more injuries. While history has focused on the triumph of engineers, the victims of the Victorian railways had names, lives and families and they deserve to be remembered . . .

Original, informative and quirky, the stories in this book linger in the memory. * GOOD BOOK GUIDE *
'an intriguing alternative history' -- B Lesle McDowell * SUNDAY HERALD *

Terry Deary was born in Sunderland in 1946 and now lives in County Durham, where the Marsden family of the Tudor Chronicles live. Once an actor and a teacher of English and drama, he is one of Britain's bestselling children's authors, with over 140 books to his credit, including the phenomenally successful Horrible Histories.

GOR006730023
Dangerous Days on the Victorian Railways: Feuds, Frauds, Robberies and Riots by Terry Deary
Terry Deary
Dangerous Days
Used - Very Good
Paperback
Orion Publishing Co
2015-05-21
224
1780226365
9781780226361
N/A
Book picture is for illustrative purposes only, actual binding, cover or edition may vary.
This is a used book - there is no escaping the fact it has been read by someone else and it will show signs of wear and previous use. Overall we expect it to be in very good condition, but if you are not entirely satisfied please get in touch with us.