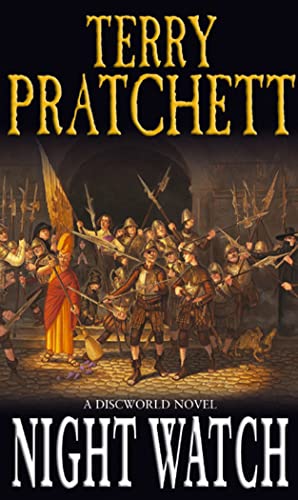 In Stock
$8.39
Commander Sam Vimes of the Ankh-Morpork City Watch had it all. Dying in the past is incredibly easy.A Discworld Tale of One City, with a full chorus of street urchins, ladies of negotiable affection, rebels, secret policemen and other children of the revolution.
Very Good Good
39 in stock

Commander Sam Vimes of the Ankh-Morpork City Watch had it all. But now he's back in his own rough, tough past without even the clothes he was standing up in when the lightning struck... Living in the past is hard. Dying in the past is incredibly easy. But he must survive, because he has a job to do. He must track down a murderer, teach his younger self how to be a good copper and change the outcome of a bloody rebellion. There's a problem: if he wins, he's got no wife, no child, no future... A Discworld Tale of One City, with a full chorus of street urchins, ladies of negotiable affection, rebels, secret policemen and other children of the revolution. Truth! Justice! Freedom! And a Hard-boiled Egg!

"'The best Discworld book in the whole world ever. Until next time'" -- Jonathan Wright * SFX *
"'He is a satirist of enormous talent... His jokes slide under your skin as swiftly as a hypodermic syringe, leaving you giggling helplessly'" -- Fiona Hook * The Times *

GOR001243718
Night Watch: (Discworld Novel 29) by Terry Pratchett
Terry Pratchett
Discworld Novels
Used - Very Good
Paperback
Transworld Publishers Ltd
2003-09-29
480
0552148997
9780552148993
Runner-up for The BBC Big Read Top 100 2003
Book picture is for illustrative purposes only, actual binding, cover or edition may vary.
This is a used book - there is no escaping the fact it has been read by someone else and it will show signs of wear and previous use. Overall we expect it to be in very good condition, but if you are not entirely satisfied please get in touch with us.