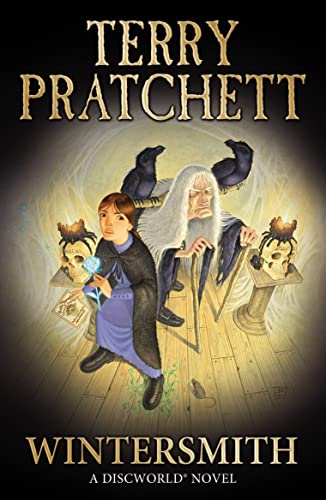 In Stock
$7.19
When the Spirit of Winter takes a fancy to young witch Tiffany Aching, he wants her to stay in his gleaming, frozen world. Because if Tiffany doesn't make it to Spring -- Spring won't come.
Like New Very Good Good
Only 2 left

When the Spirit of Winter takes a fancy to young witch Tiffany Aching, he wants her to stay in his gleaming, frozen world. For ever. It will take all the young witch's skill and cunning, as well as help from the legendary Granny Weatherwax and the irrepressible Wee Free Men, to survive until Spring. Because if Tiffany doesn't make it to Spring - - Spring won't come. THE THIRD BOOK IN THE TIFFANY ACHING SEQUENCE

"Pratchett's one-liners, the comic dialogue of the Feegles, the satire about teenagers and the credulousness of the ordinary folk make for a characteristically entertaining mix" * The Sunday Times *
"Terry Pratchett kicks the bejaysus out of JK Rowling . . . If you haven't read Pratchett before then give yourself a treat and buy this book" * In Dublin *
"Exhuberant energy and humour" * The Children's Bookseller *
"Charming in every sense of the word. Beautifully written and at times highly comic, it is an extraordinary achievement" * Books for Keeps *
"Sure to be as popular with both children and adults as all his other books" * Croydon Advertiser *

Terry Pratchett (Author) Terry Pratchett was the acclaimed creator of the global bestselling Discworld series, the first of which, The Colour of Magic, was published in 1983. In all, he was the author of over fifty bestselling books. His novels have been widely adapted for stage and screen, and he was the winner of multiple prizes, including the Carnegie Medal, as well as being awarded a knighthood for services to literature. He died in March 2015. terrypratchett.co.ukPaul Kidby (Illustrator) Paul Kidby is thirty-four and lives behind an easel in Dorset. He is best-known for his illustrations of Discworld and its inhabitants in The Pratchett Portfolio, The Discworld Diaries, The Tourist Guide to Lancre and his prints and greeting cards.

GOR007231418
Wintersmith: (Discworld Novel 35) by Terry Pratchett
Terry Pratchett
Discworld Novels
Used - Like New
Paperback
Random House Children's Publishers UK
2007-09-27
384
0552553697
9780552553698
Short-listed for British Book Awards: WH Smith Children's Book of the Year Award 2007
Book picture is for illustrative purposes only, actual binding, cover or edition may vary.
This is a used book - there is no escaping the fact it has been read by someone else and it will show signs of wear and previous use. Overall we expect it to be in very good condition, but if you are not entirely satisfied please get in touch with us.