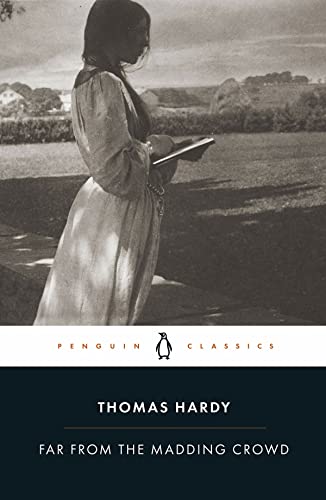 Far from the Madding Crowd
by Thomas Hardy

In Stock
$10.69
Independent and spirited Bathsheba Everdene has come to Weatherbury to take up her position as a farmer on the largest estate in the area. Her bold presence draws three very different suitors: the gentleman-farmer Boldwood, soldier-seducer Sergeant Troy and the devoted shepherd Gabriel Oak.
Like New Very Good Good
Only 2 left

Far from the Madding Crowd Summary

Far from the Madding Crowd by Thomas Hardy

Far from the Madding Crowd was Thomas Hardy's first major literary success, and it edited with an introduction and notes by Rosemarie Morgan and Shannon Russell in Penguin Classics.

Independent and spirited Bathsheba Everdene has come to Weatherbury to take up her position as a farmer on the largest estate in the area. Her bold presence draws three very different suitors: the gentleman-farmer Boldwood, soldier-seducer Sergeant Troy and the devoted shepherd Gabriel Oak. Each, in contrasting ways, unsettles her decisions and complicates her life, and tragedy ensues, threatening the stability of the whole community. The first of his works set in the fictional county of Wessex, Hardy's novel of swift passion and slow courtship is imbued with his evocative descriptions of rural life and landscapes, and with unflinching honesty about sexual relationships.

This edition, based on Hardy's original 1874 manuscript, is the complete novel he never saw published, and restores its full candour and innovation. Rosemarie Morgan's introduction discusses the history of its publication, and the Biblical and Classical allusions that permeate the novel.

Thomas Hardy (1840-1928), born Higher Brockhampton, near Dorchester, originally trained as an architect before earning his living as a writer. Though he saw himself primarily as a poet, Hardy was the author of some of the late eighteenth century's major novels: The Mayor of Casterbridge (1886), Tess of the D'Urbervilles (1891), Far from the Madding Crowd (1874), and Jude the Obscure (1895). Amidst the controversy caused by Jude the Obscure, he turned to the poetry he had been writing all his life. In the next thirty years he published over nine hundred poems and his epic drama in verse, The Dynasts.

'Wonderful ... a landscape which satisfies every stir of the imagination and which ravishes the senses'
Ronald Blythe

Far from the Madding Crowd Reviews

"Far from the Madding Crowd is the first of Thomas Hardy's great novels, and the first to sound the tragic note
for which his fiction is best remembered."
-Margaret Drabble

Thomas Hardy was born in 1840 and wrote both poetry and novels, including The Mayor of Casterbridge, Tess of the D'Urbervilles and Jude the Obscure. He died in 1928.
Rosemarie Morgan teaches in the English department at Yale University.
Shannon Russell holds a post doctoral Fellowship specializing in nineteenth- and twentieth-century literature at Oxford.

GOR010460866
Far from the Madding Crowd by Thomas Hardy
Thomas Hardy
Used - Like New
Paperback
Penguin Books Ltd
2003-02-27
480
0141439653
9780141439655
Runner-up for The BBC Big Read Top 100 2003 Short-listed for BBC Big Read Top 100 2003
Book picture is for illustrative purposes only, actual binding, cover or edition may vary.
This is a used book - there is no escaping the fact it has been read by someone else and it will show signs of wear and previous use. Overall we expect it to be in very good condition, but if you are not entirely satisfied please get in touch with us.