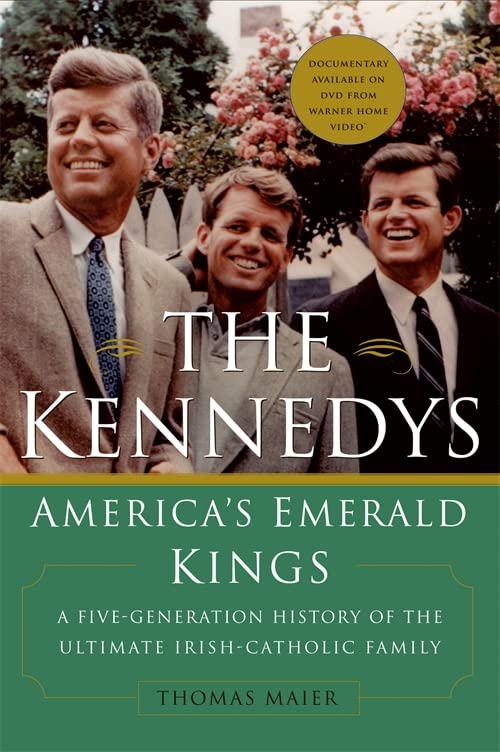 Used Price
33,99 $
Free Shipping in the US
A portrait of the country's favorite political dynasty as the ultimate Irish Catholic family-and a revelatory look at how the American immigrant experience shaped both their stunning success and spectacular tragedies.
Reviews:
Trustpilot
Very Good

The Kennedys: America's Emerald Kings: A Five-Generation History of the Ultimate Irish-Catholic Family by Thomas Maier

For 150 years, the story of the Kennedy family has been inextricably linked to their heritage as Irish-Catholic immigrants- from Patrick Kennedy's 1848 arrival in Brahmin Boston from Country Wexford Ireland, to Joseph Kennedy's Vatican ties and Jackie's thoughts on faith and sorrow, to Kennedy-confidante Father McSorley's religious counsel following the assassination of JFK. Through ground-breaking interviews with Senator Edward Kennedy and other Kennedy family and friends, acclaimed journalist Thomas Maier casts the Kennedy saga in an entirely new light, showing how their Irish catholic heritage influenced their public and private decisions. Released to coincide with a documentary adapted from the book, this edition features a new preface, in which Maier explores the dynamics of the three brothers, Ted Kennedy's legacy, and the 2008 presidential elections that have been touched in so many ways by the Kennedy family.

"A colossal work...The Kennedys is a pleasure to read and a legitimate page-turner."--BookReporter.com
"A hefty, well documented, glowing account of the Kennedys as a prime example of Irish Catholic experience in America. He paints a vivid picture of the anti-Irish, anti-Catholic sentiment that faced immigrants with brogues."--Kirkus Reviews
"The door is open and the time is right for another serious, multigenerational history of America's most fabled clan. Newsday reporter Maier answers the need quite well with this fascinating account."--Publishers Weekly
"There is a fascinating, five-generation story to tell here, and Maier does it well...this book reads like a metaphor for the Irish immigrant experience itself."--Providence Journal
"This extremely readable biography not only examines one particular immigrant family but also sheds light on the larger story of Irish Americans from the early twentieth century onward."--Booklist
"You can't understand the Kennedys unless you look at their Irish Catholic roots. Thomas Maier has gone far beyond earlier Kennedy biographers and historians to reveal ties that shaped the Kennedys long after they left Ireland. And he's done it in a lively, readable way."--Evan Thomas, author of Robert Kennedy: His Life

Thomas Maier is a special writer at New York Newsday. He is the author of the critically acclaimed biography Dr. Spock, which was a New York Times Notable Book of the Year and one of the Boston Globe's top ten nonfiction titles of 1998, and Newhouse, which won the Frank Luther Mott Award for Best Media Book. He lives on Long Island, New York.

GOR001292924
The Kennedys: America's Emerald Kings: A Five-Generation History of the Ultimate Irish-Catholic Family by Thomas Maier
Thomas Maier
Used - Very Good
Paperback
INGRAM PUBLISHER SERVICES US
2004-10-06
736
0465043186
9780465043187
N/A
Book picture is for illustrative purposes only, actual binding, cover or edition may vary.
This is a used book - there is no escaping the fact it has been read by someone else and it will show signs of wear and previous use. Overall we expect it to be in very good condition, but if you are not entirely satisfied please get in touch with us.