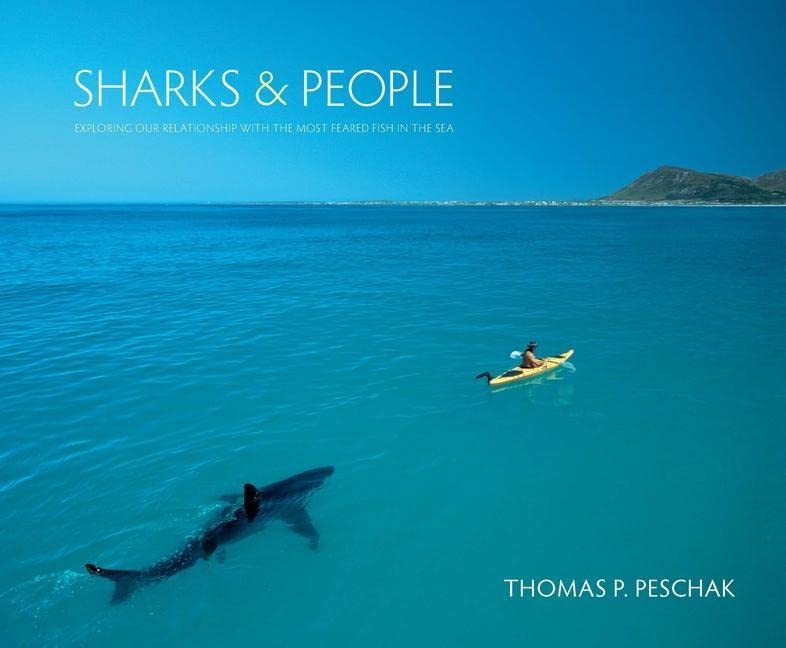 Used Price
$32.99
Free Shipping in the US
At once feared and revered, sharks have captivated people since our earliest human encounters. Along with photographs, this book tells the compelling story of the natural history of sharks. It also presents photographs that capture the relationship between people and sharks around the globe.
Reviews:
Trustpilot
Very Good

Sharks and People: Exploring Our Relationship with the Most Feared Fish in the Sea by Thomas P. Peschak

At once feared and revered, sharks have captivated people since our earliest human encounters. Children and adults alike stand awed before aquarium shark tanks, fascinated by the giant teeth and unnerving eyes. And no swim in the ocean is undertaken without a slight shiver of anxiety about the very real - and very cinematic - dangers of shark bites. But our interactions with sharks are not entirely one-sided: the threats we pose to sharks through fisheries, organized hunts, and gill nets on coastlines are more deadly and far-reaching than any bite. A contributing photographer to National Geographic, Thomas P. Peschak is best known for his unusual photographs of sharks - his iconic image of a great white shark following a researcher in a small yellow kayak is one of the most recognizable shark photographs in the world. The other images gathered here are no less riveting, bringing us as close as possible to sharks in the wild. Alongside the photographs, Sharks and People tells the compelling story of the natural history of sharks. Sharks have roamed the oceans for more than four hundred million years, and in this time they have never stopped adapting to the ever-changing world-their unique cartilage skeletons and array of super-senses mark them as one of the most evolved groups of animals. Scientists have recently discovered that sharks play an important role in balancing the ocean, including maintaining the health of coral reefs. Yet, tens of millions of sharks are killed every year just to fill the demand for shark fin soup alone. Today more than sixty species of sharks, including hammerhead, mako, and oceanic white-tip sharks, are listed as vulnerable or in danger of extinction. The need to understand the significant part sharks play in the oceanic ecosystem has never been so urgent, and Peschak's photographs bear witness to the thrilling strength and unique attraction of sharks. They are certain to enthrall and inspire. In Sharks and People acclaimed wildlife photographer Thomas Peschak presents stunning photographs that capture the relationship between people and sharks around the globe.

"Peschak makes an eloquent visual case for the sublimity of sharks--and also for their conservation. He notes that the media still devotes far more attention to rare shark attacks than to the urgent need to protect them from human depredation, especially the shark fin trade. . . . Great conservation photography like Peschak's, one must hope, will have the power to change attitudes globally."-- "Atlantic"
"This coffee-table volume with its fine photography is a visual treat as well as a plea for conservation of predator species that are essential for the health of marine ecosystems. Recommended."-- "Choice"

Thomas P. Peschak is a fellow of the International League of Conservation Photographers and a contributing photographers to National Geographic Magazine. He has won multiple World Press Photo and BBC Wildlife Photographer of the Year awards. His other books include Currents of Contrast, South Africa's Great White Shark, Wild Seas, Secret Shores of Africa, and Lost World.

GOR006885863
Sharks and People: Exploring Our Relationship with the Most Feared Fish in the Sea by Thomas P. Peschak
Thomas P. Peschak
Used - Very Good
Hardback
The University of Chicago Press
2013-09-20
256
022604789X
9780226047898
N/A
Book picture is for illustrative purposes only, actual binding, cover or edition may vary.
This is a used book - there is no escaping the fact it has been read by someone else and it will show signs of wear and previous use. Overall we expect it to be in very good condition, but if you are not entirely satisfied please get in touch with us.