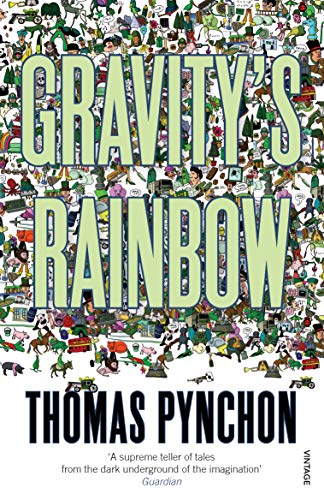 Gravity's Rainbow is never a single story, but a proliferation of characters - Pirate Prentice, Teddy Bloat, Tantivy Mucker-Maffick, Saure Bummer, and more - and events that tantalize the reader with suggestions of vast patterns only just past our comprehension.

Tyrone Slothrop, a GI in London in 1944, has a big problem. Whenever he gets an erection, a Blitz bomb hits. Slothrop gets excited, and then, as Thomas Pynchon puts it in his sibilant opening sentence, 'a screaming comes across the sky', heralding an angel of death, a V-2 rocket. Soon Tyrone is on the run from legions of bizarre enemies through the phantasmagoric horrors of Germany.

Gravity's Rainbow is never a single story, but a proliferation of characters - Pirate Prentice, Teddy Bloat, Tantivy Mucker-Maffick, Saure Bummer, and more - and events that tantalize the reader with suggestions of vast patterns only just past our comprehension. It is a blizzard of references to science, history, high culture, and the lowest of jokes and among the most important novels of our time.

Winner of the National Book Award.

The best seller described as the kind of Ulysses which Joyce might have written if he had been a Boeing engineer with a fetish for quadrille paper * Irish Examiner *
Pynchon's masterpiece. -- John Sutherland * Guardian *
Thomas Pynchon gives us 20th-century fiction's finest memento mori. -- John Sutherland * The Times *
This stunner is already classed with Moby Dick and Ulysses. Set in Europe at the end of WWII, with the V2 as the White Whale, the novel's central characters race each other through a treasure hunt of false clues, disguises, distractions, horrific plots and comic counterplots to arrive at the formula which will launch the Super Rocket... Impossible here to convey the vastness of Pynchton's range, the brilliance of his imagery, the virtuosity of his style and his supreme ability to incorporate the cultural miasma of modern life * Vogue *
Pynchon leaves the rest of the American lierary establishment at the starting gate...the range over which he moves is extraordinary, not simply in terms of ideas explored but also in the range of emotions he takes you through * Time Out *

Thomas Pynchon is the author of V., The Crying of Lot 49, Gravity's Rainbow, Slow Learner, a collection of short stories, Vineland, Mason and Dixon, Against the Day and Inherent Vice. He received the National Book Award for Gravity's Rainbow in 1974.

GOR001241259
Gravity's Rainbow by Thomas Pynchon
Thomas Pynchon
Used - Very Good
Paperback
Vintage Publishing
1995-07-20
912
0099533219
9780099533214
N/A
Book picture is for illustrative purposes only, actual binding, cover or edition may vary.
This is a used book - there is no escaping the fact it has been read by someone else and it will show signs of wear and previous use. Overall we expect it to be in very good condition, but if you are not entirely satisfied please get in touch with us.