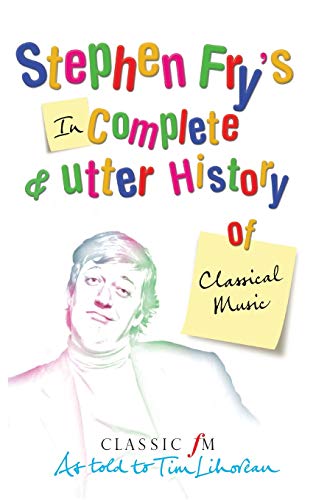 In Stock
$7.69
A riotous, rambling and incomplete history of classical music, complete with leg measurements
Very Good Good
7 in stock

'Hello, I'm Stephen Fry. Now time for the first outing of a brand, spanking new feature here on The Incomplete and Utter History of Classical Music... putting some unsuspecting figure in music under the spotlight.'

In his Incomplete & Utter History of Classical Music, Stephen Fry presents a potted and brilliantly rambling 700-year history of classical music and the world as we know it. Along this musical journey he casually throws in references to pretty much whatever takes his fancy, from the Mongol invasion of Russia and Mr Khan (Genghis to his friends), the founding of the MCC, the Black Death (which once again became the new black in England), to the heady revolutionary atmosphere of Mozart's Don Giovanni and the deep doo-doo that Louis XVI got into (or 'du-du' as the French would say).

It's all here - Ambrose and early English plainsong, Bach, Mozart (beloved of mobile phones everywhere), Beethoven, Debussy, Wagner (the old romantic), right up to the present day. Entertaining and brilliantly written, this is a pretty reckless romp of a history through classical music and much much more.

Tim Lihoreau regularly writes with Stephen Fry and is the muli-award winning scriptwriter for the Classic FM The Incomplete & Utter History of Classical Music. He is also Creative Director for Classic FM, and lives in Cambridge.

GOR001224360
Stephen Fry's Incomplete and Utter History of Classical Music by Tim Lihoreau
Tim Lihoreau
Used - Very Good
Paperback
Pan Macmillan
2005-09-02
320
0330438565
9780330438568
N/A
Book picture is for illustrative purposes only, actual binding, cover or edition may vary.
This is a used book - there is no escaping the fact it has been read by someone else and it will show signs of wear and previous use. Overall we expect it to be in very good condition, but if you are not entirely satisfied please get in touch with us.