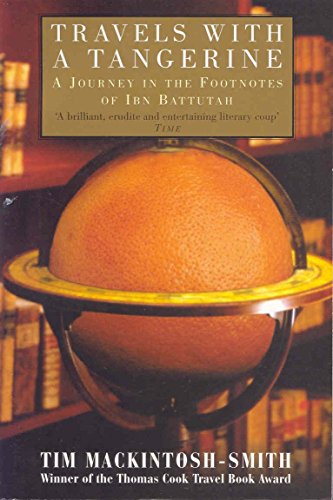 Travels with a Tangerine
by Tim Mackintosh-Smith

In Stock
$6.69
'In an age where writers feel the need to travel with fridges and pigs, this journey with a Tangerine stands out for its integrity and intelligence' Spectator
Very Good
10 in stock

Travels with a Tangerine Summary

Travels with a Tangerine by Tim Mackintosh-Smith

'A gripping and accomplished travel book . . . [it] stands out for its integrity and intelligence' Anthony Sattin, Sunday Times

Ibn Battutah was the greatest traveller of the pre-mechanical age, journeying for twenty nine years and covering three times the ground Marco Polo covered. Tim Mackintosh-Smith follows the first stage of Ibn Battutah's journey, from Tangier to Constantinople. Destinations include an Islamic Butlin's in the Egyptian desert, Assassin castles in Syria, the Kuria Maria Islands in the Arabian Sea and some of the greatest cities of Medeival Islam. He also cleverly compares the contemporary Muslim world with the past.

'Mackintosh-Smith slips effortlessly between our world and that of the fourteenth century. In doing so, he has created a gripping and accomplished travel book... We will be lucky if there is a better one published this year' Sunday Times

Tim Mackintosh-Smith has lived in San'a -- the Yemeni capital -- for the last twenty years. His acclaimed Travels with a Tangerine: A Journey in the Footnotes of Ibn Battutah won him a Thomas Cook/ Daily Telegraph Travel Book Award.

GOR001244762
Travels with a Tangerine by Tim Mackintosh-Smith
Tim Mackintosh-Smith
Used - Very Good
Paperback
Pan Macmillan
2002-06-07
368
0330491148
9780330491143
N/A
Book picture is for illustrative purposes only, actual binding, cover or edition may vary.
This is a used book - there is no escaping the fact it has been read by someone else and it will show signs of wear and previous use. Overall we expect it to be in very good condition, but if you are not entirely satisfied please get in touch with us.