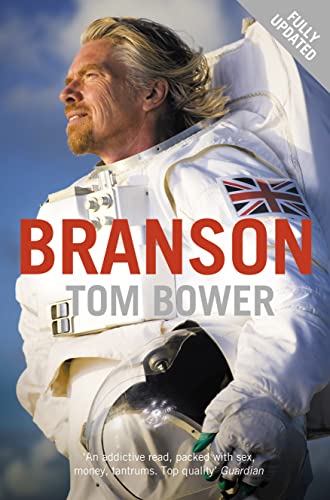 The sensational critical biography of this phenomenal entrepreneur and his business practices - fully updated to cover Branson's recent ventures.

The sensational critical biography of this phenomenal entrepreneur and his business practices - fully updated to cover Branson's recent ventures.

No British tycoon is more popular, few claim to be richer and none has masterminded a more recognisable brand than Richard Branson. What is behind the success of the buccaneering balloonist, the tabloids' favourite celebrity nude, the `grinning jumper' and the scourge of corporate goliaths?

Helped by eyewitness accounts of more than 250 people with direct experience of Branson, Tom Bower has a uncovered a different tale to the one so eagerly promoted by Virgin's publicists. Here is the full story of Branson: his businesses, his friendships, his ambition, his law-breaking, his drug-taking, his bullying. From the cockpit of a balloon in the clouds to the centre of Branson's operations in his Holland Park home this book is an intimate scrutiny of exactly how Richard Branson created himself and sold himself. Tom Bower's biography reveals Branson to be a single-minded profiteer who, while occasionally generous to others, has a fixed purpose to enhance his family's wealth in secret off-shore trust funds. Instead of a glittering saint, Branson emerges as a devious actor, proud of plucking for his own profit the good ideas of others.

From his quest to acquire the license for the National Lottery to his plans to launch space tourism with Virgin Galactic, this fully updated edition follows Branson's enterprises and investments up to the recent, failed bid for Northern Rock.

'One of the most devastating books of the year...an explosive book. Bower reveals a remarkable and sinister picture of the man who likes to appear as the ever-smiling hero.' Daily Mail

Tom Bower has a distinguished reputation as an investigative historian, broadcaster and journalist and is the author of several ground-breaking books about tycoons. His most recent works are `Conrad and Lady Black', `The Squeeze' and his biographies of Simon Cowell and Bernie Ecclestone. Among his other much-debated biographies are those of Mohammed Fayed, Richard Branson and Robert Maxwell.

GOR001234318
Branson by Tom Bower
Tom Bower
Used - Very Good
Paperback
HarperCollins Publishers
2008-01-07
416
0007266766
9780007266760
N/A
Book picture is for illustrative purposes only, actual binding, cover or edition may vary.
This is a used book - there is no escaping the fact it has been read by someone else and it will show signs of wear and previous use. Overall we expect it to be in very good condition, but if you are not entirely satisfied please get in touch with us.