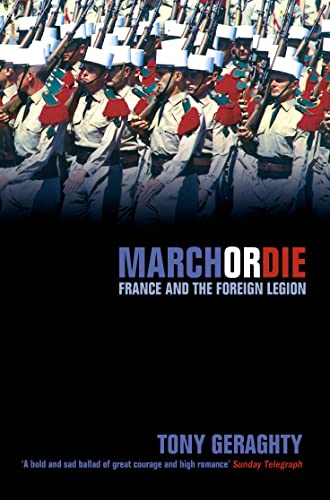 March Or Die
by Tony Geraghty

March Or Die by Tony Geraghty

Tony Geraghty analyses the legend and re-examines the battle honours of the Foreign Legion, and his revelations illuminate the darker side of its historic relationship to the motherland. Called into being in 1831 as a device to absorb the footloose veterans of Napoleon's old armies, the French Foreign Legion subsequently won astonishing victories in the farflung battlefields of Spain, the Crimea, Algeria and Morrocco, Italy, Mexico, Syria, Indo-China, Madagascar, and West and Central Africa.

March or Die also traces the Legion's diminished fortunes in recent years. It has fought in the Gulf War, Rwanda and Kosovo among other conflicts, but has found itself in 'a world of political correctness which left the Legion marooned on an island of admirable but anachronistic values'. Forced to accept women in its ranks and no longer unique now that conscription has been abolished, it is searching for its place in the modern world.

`As a reference book, March or Die cannot be faulted'
TLS

Tony Geraghty, author of the SAS history Who Dares Wins, The Bullet Catchers and Beyond the Front Line, is himself a military veteran, first with the Paras and then as a British officer in the Gulf conflict. As a liaison officer with US forces he was awarded an American decoration. He is also an Irish citizen.

GOR001966119
March Or Die by Tony Geraghty
Tony Geraghty
Used - Very Good
Paperback
HarperCollins Publishers
2001-05-21
448
0006531741
9780006531746
N/A
Book picture is for illustrative purposes only, actual binding, cover or edition may vary.
This is a used book - there is no escaping the fact it has been read by someone else and it will show signs of wear and previous use. Overall we expect it to be in very good condition, but if you are not entirely satisfied please get in touch with us.