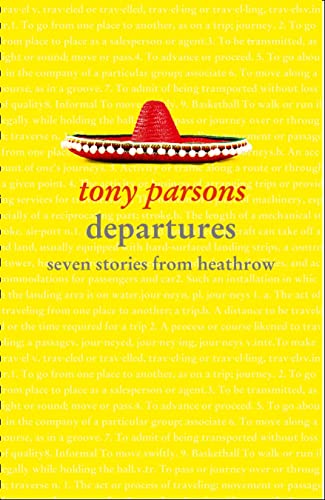 Used Price
$7.69
Free Shipping in the US

Seven short stories from bestselling author Tony Parsons, based on his week as Writer in Residence at Heathrow airport.

Seven short stories from bestselling author Tony Parsons, based on his week as Writer in Residence at Heathrow airport.

Here is Heathrow as it has never been seen before - a secret city populated by the 75 million travellers who pass through every year, a place where journeys and dreams end - and begin.

From the brilliant twenty-something kids who control the skies up in Air Traffic Control to the softly-spoken man who cares for the dogs, lions and smuggled rattlesnakes at Heathrow's Animal Reception Centre, from the immigration officers who have heard it all before to the firemen who hone their skills by setting the green plane on fire, from the armed police who watch for terrorist attacks to the pilots who have touched the face of god - Heathrow teems with life.

In Departures, his first collection of short stories, Tony Parsons takes us deep inside the secret city.

`A fascinating concept, very well executed . . . Perfect to dip in and out of.' Sun

`Packs a surprisingly strong punch . . . Parsons captures just what it means to be grounded in a transitory world' Mirror

Tony Parsons is the author of Man and Boy , winner of the Book of the Year prize. His subsequent novels - One For My Baby, Man and Wife, The Family Way, Stories We Could Tell, My Favourite Wife, Starting Over and Men from the Boys - were all bestsellers. He is writing a Quick Read for World Book Day, watch out for Beyond the Bounty. He lives in London.

GOR003329506
Departures: Seven Stories from Heathrow by Tony Parsons
Tony Parsons
Used - Very Good
Paperback
HarperCollins Publishers
2011-10-27
144
0007458657
9780007458653
N/A
Book picture is for illustrative purposes only, actual binding, cover or edition may vary.
This is a used book - there is no escaping the fact it has been read by someone else and it will show signs of wear and previous use. Overall we expect it to be in very good condition, but if you are not entirely satisfied please get in touch with us.