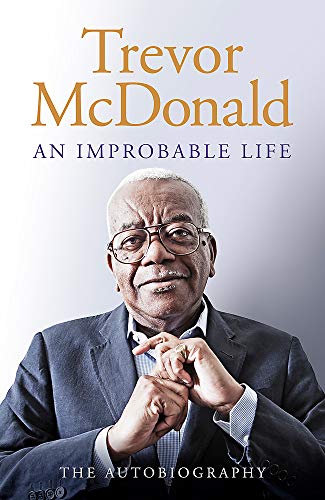 An Improbable Life
by Trevor McDonald

An Improbable Life: The Autobiography by Trevor McDonald

'That life is an extraordinary one ... McDonald has grilled some of modern history's most revered and reviled figures, from Nelson Mandela to Saddam Hussein. In his memoir he offers a fascinating behind-the-scenes look at these moments and reflects on his own remarkable journey' RADIO TIMES

Sir Trevor McDonald is an extraordinary man - and he has led an improbable life. Now in his 80th year, he is known and loved by people the world over for his humility, charm and natural ease. As a natural storyteller and communicator, he has few equals.

In An Improbable Life, Sir Trevor recounts his personal experience of world events and interviews with globally famous - or notorious - figures. He has witnessed war and death and risked his own life to meet and talk with despots and liberators. We read about his first trip to South Africa, and obtaining the first British television interview with Nelson Mandela; his reflections on the Windrush generation; and experiencing Barack Obama's momentous inauguration as President of the USA. We are also present at his dramatic meetings with Saddam Hussein (the first and only one by a British television correspondent) and Muammar Gaddafi.

Engaging, intimate and moving, this is the life story of an exceptional journalist and broadcaster who over decades has expertly revealed to us history in the making.

The broadcasting legend's autobiography is written in his trademark charming and enigmatic style -- Nina Pottell * PRIMA *
Veteran broadcaster Sir Trevor McDonald tells his life story through his in-depth experience of world events and vivid encounters with important political figures in the engaging An Improbable Life * CHOICE magazine *
Covering the election of Barack Obama as President of the United States in 2008 was the final act of Trevor McDonald's six-decade broadcasting career, but it comes at the start of his autobiography, An Improbable Life. That life is an extraordinary one: as a reporter and newsreader, 80-year-old McDonald has grilled some of modern history's most revered and reviled figures, from Nelson Mandela to Saddam Hussein. In his memoir he offers a fascinating behind-the-scenes look at these moments and reflects on his own remarkable journey, from Radio Trinidad to ITV's News at Ten * RADIO TIMES *
As he reflects over a career that encompassed meeting leaders and dictators, as well as the deeply personal Windrush scandal, the eighty-year-old journalist and broadcaster offers an insight into the history that has shaped our world and his * MY WEEKLY *
A fascinating read * PLATINUM *

Trevor McDonald became the first sole presenter of ITN's 'News at Ten' in 1992 and presented the evening news until 2005. By then he had received more awards than any other news broadcaster in Britain.

Born in Trinidad in 1939, the son of Lawson and Geraldine, he came to Britain in 1969, joined the BBC World Service and moved to ITN in 1973. He has been ITN Diplomatic Correspondent, and Diplomatic Editor of Channel 4 News, where his coverage of the Philippine Elections in 1985 won a BAFTA award. In his ensuing years at ITN, Trevor McDonald conducted the most important television interviews of his time: with US Presidents Bill Clinton and George W. Bush, and secretaries of State Colin Powell and Condoleezza Rice, former PLO leader Yasser Arafat and Prime Minister Tony Blair. He has presented a number of documentaries for ITV1, most recently 'Trevor McDonald's Indian Train Adventure.'

GOR010331785
An Improbable Life: The Autobiography by Trevor McDonald
Trevor McDonald
Used - Very Good
Paperback
Orion Publishing Co
2019-10-17
336
1474614760
9781474614764
N/A
Book picture is for illustrative purposes only, actual binding, cover or edition may vary.
This is a used book - there is no escaping the fact it has been read by someone else and it will show signs of wear and previous use. Overall we expect it to be in very good condition, but if you are not entirely satisfied please get in touch with us.