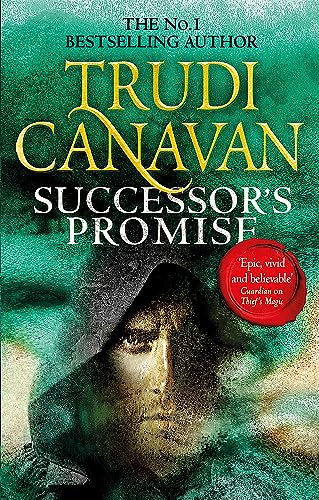 International No. 1 bestselling author Trudi Canavan returns with the third instalment in the Millennium's Rule series - her most powerful and thrilling adventure yet.

Five years have passed since the Rebels confronted the Raen. Five years, in which Qall - the boy Rielle rescued - has grown up among the Travellers, with no memory of the life that was stolen from him. Five years of chaos, barely contained by Baluka and the Restorers. Worlds are at war, some overrun by deadly machines, some drained of magic by power-hungry sorcerers.

As Qall comes of age, and Rielle and Tyen's hard-won peace is threatened, their loyalties are tested - and Qall's very existence is at stake. Because Dahli is still determined to restore Valhan to power, and he will stop at nothing to succeed.

Escape to a new world.
Discover the magic of Trudi Canavan.

It's easy to see why Trudi Canavan's novels so often make the bestseller lists. Her easy, flowing style makes for effortless reading . . . Delightful world-building . . . Vivid and enjoyable * SFX on THIEF'S MAGIC *
A must for fans of Canavan's previous work and for fantasy fans in general * PRESS ASSOCIATION on ANGEL OF STORMS *
Another page-turner from one of fantasy's best-selling authors * INDEPENDENT on ANGEL OF STORMS *
Canavan brings the two very different worlds to vivid life, writes believable characters caught in dilemmas and leads the story to a satisfying climax while leaving room for future development * GUARDIAN on THIEF'S MAGIC *

Trudi Canavan published her first story in 1999 and it received an Aurealis Award for Best Fantasy Short Story. Her debut series, the Black Magician trilogy, made her an international success, and all three volumes of her Age of the Five trilogy were Sunday Times bestsellers. Trudi Canavan lives with her partner in Melbourne, Australia, and spends her time writing, painting and weaving.

GOR009412125
Successor's Promise: The thrilling fantasy adventure (Book 3 of Millennium's Rule) by Trudi Canavan
Trudi Canavan
Millennium's Rule
Used - Good
Paperback
Little, Brown Book Group
2018-08-14
592
0356501183
9780356501185
N/A
Book picture is for illustrative purposes only, actual binding, cover or edition may vary.
The book has been read but remains in clean condition. All pages are intact and the cover is intact. Some minor wear to the spine.