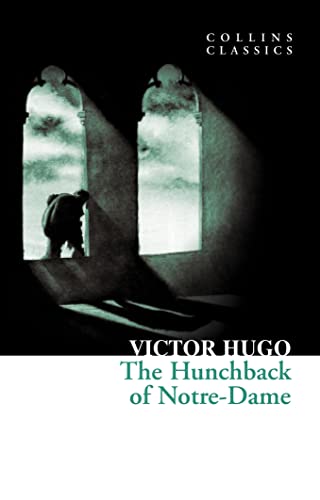 The Hunchback of Notre-Dame
by Victor Hugo

The Hunchback of Notre-Dame Summary

The Hunchback of Notre-Dame (Collins Classics) by Victor Hugo

`Love is like a tree, it grows of its own accord, it puts down deep roots into our whole being.'

Set in medieval Paris, against the backdrop of the brooding Cathedral of Notre-Dame, Hugo's take on the classic story of Beauty and the Beast tells of the hunchbacked, grotesque bellringer, Quasimodo. Rejected by Parisian society because of his appearance, Quasimodo resides in Notre-Dame, harbouring a love for the only woman that pities him, a gypsy named Esmerelda. However, a sinister archdeacon also covets Esmerelda, and when his advances are spurned, he seeks to destroy her.

Customer Reviews - The Hunchback of Notre-Dame

Victor Marie Hugo (1802-1885) was a French poet, novelist, and dramatist of the Romantic movement and is considered one of the greatest French writers. Hugo's best-known works are the novels Les Miserables, 1862, and The Hunchbak of Notre-Dame, 1831, both of which have had several adaptations for stage and screen.

GOR010454446
The Hunchback of Notre-Dame (Collins Classics) by Victor Hugo
Victor Hugo
Collins Classics
Used - Like New
Paperback
HarperCollins Publishers
2011-10-01
688
0007902131
9780007902132
N/A
Book picture is for illustrative purposes only, actual binding, cover or edition may vary.
The book has been read, but looks new. The book cover has no visible wear, and the dust jacket is included if applicable. No missing or damaged pages, no tears, possible very minimal creasing, no underlining or highlighting of text, and no writing in the margins.