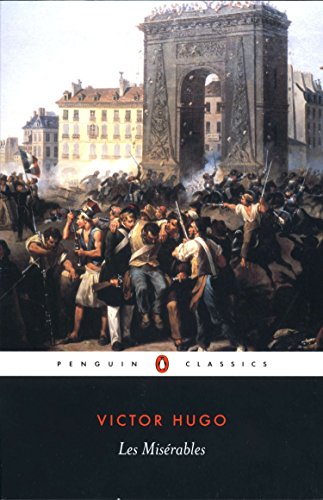 Used Price
$6.39
Free Shipping in the US
Part comedy, mystery, romance and tragedy - and a social document of France's turbulent revolutionary history, this title tells a tale of injustice, heroism and love that follows the fortunes of Jean Valjean, an escaped convict determined to put his criminal past behind him.
Reviews:
Trustpilot
Very Good Good

Victor Hugo's tale of injustice, heroism and love follows the fortunes of Jean Valjean, an escaped convict determined to put his criminal past behind him. But his attempts to become a respected member of the community are constantly put under threat: by his own conscience, when, owing to a case of mistaken identity, another man is arrested in his place; and by the relentless investigations of the dogged Inspector Javert. It is not simply for himself that Valjean must stay free, however, for he has sworn to protect the baby daughter of Fantine, driven to prostitution by poverty.

Victor Hugo (1802-85) wrote volumes of criticism, dramas, satirical verse and political journalism but is best remembered for his novels, especially Notre-Dame de Paris (also known as The Hunchback of Notre-Dame) and Les Miserables, which was adapted into one of the most successful musicals of all time.

'All human life is here'
Cameron Mackintosh, producer of the musical Les Miserables

"Hugo's genius was for the creation of simple and recognizable myth. The huge success of Les Miserables as a didactic work on behalf of the poor and oppressed is due to his poetic and myth-enlarged view of human nature." --V. S. Pritchett

"It was Tolstoy who vindicated [Hugo's] early ambition by judging Les Miserables one of the world's great novels, if not the greatest... [His] ability to present the extremes of experience 'as they are' is, in the end, Hugo's great gift." --From the Introduction by Peter Washington

Victor Hugo was born in 1820. He was one of France's greatest poets, dramatists and novelists. During his lifetime he produced twenty volumes of poetry, nine novels and ten plays. He was deeply concerned with the social and political developments ofhis time and his outspokenness eventually forced him to leave France until 1870 when he was elected to the national assembly.
Norman Denny was educated at Radley College.

CIN000219978
Les Miserables by Victor Hugo
Victor Hugo
Used - Very Good
Paperback
Penguin Books Ltd
1982-03-25
1232
0140444300
9780140444308
N/A
Book picture is for illustrative purposes only, actual binding, cover or edition may vary.
This is a used book - there is no escaping the fact it has been read by someone else and it will show signs of wear and previous use. Overall we expect it to be in very good condition, but if you are not entirely satisfied please get in touch with us.