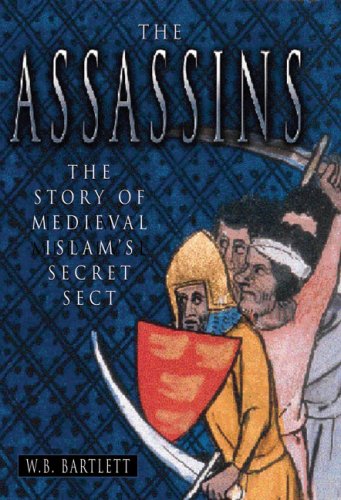 Assassins
by W. B. Bartlett

Used Price
$10.39
Free Shipping in the US
The true history of the legendary Islamic Assassins
Reviews:
Trustpilot
Very Good

Assassins: The Story of Medieval Islam's Secret Sect by W. B. Bartlett

The so-called 'Assassins' are one of the most spectacular legends of medieval history. In the popular imagination they are drug-crazed fanatics who launched murderous attacks on their enemies, terrorising the medieval world. Since the tales of Marco Polo and others, the myths surrounding them have been fantastically embellished and the truth has become ever more obscure. Universally loathed and feared, they were especially frightening because they apparently had no fear of death. Bartlett's book deftly traces the origins of the sect out of the schisms within the early Islamic religion and examines the impact of Hasan-i-Sabbah, its founder, and Sinan - the legendary 'Old Man of the Mountain'. This popular history follows the vivid history of the group over the next two centuries, including its clash with the crusaders, its near destruction at the hands of the Mongols, and its subsequent history. Finally, and fascinatingly, we discover how the myths surrounding the Assassins have developed over time, and why indeed they continue to have such an impact on the popular imagination.

"An excellent work of popular history geared to general readers, but scholars will appreciate both the accuracy and insight Bartlett displays." --Booklist on An Ungodly War
"More to Lewis's story than one of terror and bloodshed . . . a fascinating glimpse into an extraordinary and unsettling world." --Kirkus Reviews UK

About W. B. Bartlett

W. B. Bartlett isa medieval historian whose other titles include "The Crusades," " God Wills It!," "Islam s War Against the Crusaders," "The Last Crusade," "The Road to Armageddon," and "An Ungodly War.""

GOR006480494
Assassins: The Story of Medieval Islam's Secret Sect by W. B. Bartlett
W. B. Bartlett
Used - Very Good
Paperback
The History Press Ltd
2009-07-01
336
0752452053
9780752452050
N/A
Book picture is for illustrative purposes only, actual binding, cover or edition may vary.
This is a used book - there is no escaping the fact it has been read by someone else and it will show signs of wear and previous use. Overall we expect it to be in very good condition, but if you are not entirely satisfied please get in touch with us.