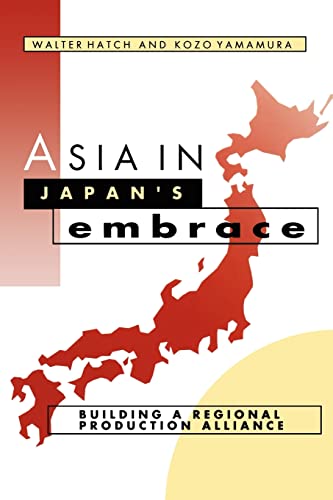 Asia in Japan's Embrace
by Walter Hatch (University of Washington)

Used Price
$13.69
Free Shipping in the US
Comprehensive and controversial, this book is an incisive analysis of Japan's economic presence in Asia. The authors argue that business and government elites are working to build an expanded production zone in Asia. They outline the policy implications of this complex network, and its impact on global trade.
Reviews:
Trustpilot
Very Good

This book is an incisive analysis of Japan's deepening economic presence in Asia. It challenges neoclassical economists, arguing that instead of simply building a 'yen bloc' or responding to market forces, Japanese business and government elites are working together to build an expanded - and potentially exclusive - production zone. The authors suggest that the transplantation of many standard Japanese business practices in Asia is based on the concept of keiretsu (enterprise group) which allows a complex web of production networks to develop. The book shows that such strategic control of technology is a unique model of globalisation. While informed by economic theory, Asia in Japan's Embrace is highly accessible, containing interviews and anecdotal evidence from factory floors and board rooms. It is comprehensive and controversial, outlining policy implications and the impact on global trade.

'Readers familiar with recent writings on Japan will find this book steers a middle course between the neoclassical view, which denies Japan's uniqueness, and the revisionist arguments pioneered by Chalmers Johnson and emphasised by James Fallows. The book is easy to read, well-written, and carefully explained. When it uses concepts or terms such as keiretsu it is careful to explain them. The first four chapters, in particular, are to be recommended to all readers.' Salim Rashid, The Economic Journal
"An incisive analysis of Japan's growing presence throughout the Asian region." Business Horizons

Preface, Part I. Co-prosperity Again: 1. Crossing borders: the Japanese difference; 2. Flying geese: an unequal alliance in Asia; Part II. The Embracer and the Embraced: 3. Cooperation between unequals; 4. The political economy of Japan; 5. The political economy of Asia; 6. Holding technology; Part III. A Japanese Alliance in Asia: 7. The visible handshake; 8. Vertical veins of humanity; 9. The labor network; 10. The supply network; Part IV. A Poweful Embrace: 11. The ties that bind; 12. Loosening the knot.

GOR010332515
Asia in Japan's Embrace: Building a Regional Production Alliance by Walter Hatch (University of Washington)
Walter Hatch (University of Washington)
Cambridge Asia-Pacific Studies
Used - Very Good
Paperback
Cambridge University Press
1996-06-28
298
0521565154
9780521565158
N/A
Book picture is for illustrative purposes only, actual binding, cover or edition may vary.
This is a used book - there is no escaping the fact it has been read by someone else and it will show signs of wear and previous use. Overall we expect it to be in very good condition, but if you are not entirely satisfied please get in touch with us.