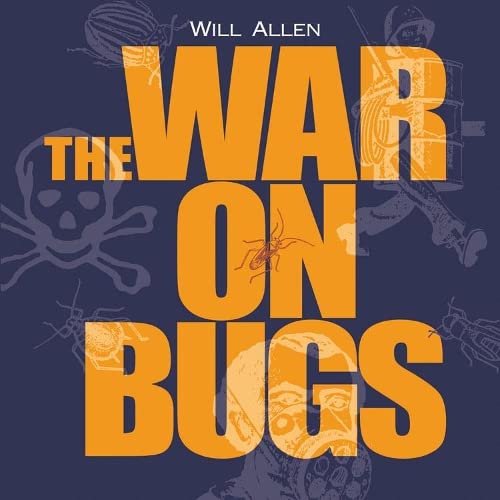 The War on Bugs
by Will Allen

Reveals how advertisers, editors, scientists, large scale farmers, government agencies, and even Dr. Seuss, colluded to convince farmers to use deadly chemicals, hormones, and GMOs in an effort to pad their wallets and control the American farm enterprise.

The War on Bugs Summary

The War on Bugs by Will Allen

In the early nineteenth century, as the American population grew rapidly, demands on crop output increased. Seeing an opportunity to play upon fears from market demand, chemical companies declared war on the vile, profitsucking, output-wreaking, arch-nemesis of the average American farmer - bugs. With precision, pesticide manufacturers delivered a 'shock and awe' media campaign, that can only be compared to the current blitzkrieg from today's pharmaceutical companies. Bugs were the threat to the American dream - and there was a cure available to every farmer in spray, granule, dust, or systemic form that could be applied to your crops. Will Allen's The War on Bugs reveals how advertisers, editors, scientists, large scale farmers, government agencies, and even Dr. Seuss, colluded to convince farmers to use deadly chemicals, hormones, and genetically modified organisms (GMOs) in an effort to pad their wallets and control the American farm enterprise. Utilizing dozens of original advertisements and promotions to illustrate the story, Allen details how consumers and activists have struggled against toxic food. The War on Bugs shouts that the time to stop poisoning our food, water, air, and ourselves is now!

Customer Reviews - The War on Bugs

The War on Bugs Reviews

Culture, Agriculture, Food and Environment- "This book is useful and important to anthropologists not because of the answers that it gives but because of the questions that it asks and the answers it suggests that we need to find. ... Allen's work asks us to dig deeper into the history of the small family farmer and to understand in detail the process by which the image imposed on American farming by agribusiness came to dominate public consciousness. ... Allen's ambitiousness in writing this book has brought broad and related themes into view that converge in the historical processes and public consciousness surrounding chemical farming in the United States. It is a highly useful book for under-graduate classes and for scholars seeking to develop new ideas and critical perspectives on the history of current issues in agriculture."

Will Allen has been farming organically since 1972 in Oregon, California, and Vermont, where he now co-manages Cedar Circle Farm. He founded the Sustainable Cotton Project and is a board member of the Organic Consumers Association, Rural Vermont, and is a co-chair of Farms Not Arms.

Preface Introduction 1. The Roots of Farming in the Americas 2. Americais First Farm Revitalization Movement 3. The Birth of the Rural Journals 4. Guano and the Birth of the Rural-Industrial Mouthpiece 5. Liebig and the Industrialists 6. The Fertilizer Merchants 7. The Medical Ancestry of Pesticides 8. Ratcatchers, Quacks, and Early Pest Control in America 9. The Populist Farmersi Movement 10. Pain Pigments and Other Lethal Poisons 11. Arsenic Regulation, the FDA, and Other Regulatory Hoaxes 12. The First Advertised War on the Farms 13. Populist Farmers, the Red Scare, and the Origin of the Modern Organic Movement 14. Pesticide Spray Devices, Household Poisons, and Dr. Seuss 15. Medical Heroes, War Heroes, and More Regulation Struggles 16. The Pesticides of the 1930s 17. Bombs and Fertilizers 18. War Toys 19. Animal Confinement and the Pharmaceutical Farm 20. DDT and Other Second-Generation Pesticides under Attack 21. Twenty-First-Century Populism: Organic Farming and the Anti-factory-farm movement 22. Designer Genes: A Leap of Faith 23. 160 Years of Poisonous Advertising 24. Who Invited These Chemicals to Dinner? A Leap of Hope Appendix: Analysis of Pesticide Use on Certain Popular Crops from California Notes Bibliography Index

CIN000112827
The War on Bugs by Will Allen
Will Allen
Used - Very Good
Hardback
Chelsea Green Publishing Co
2007-02-14
336
1933392460
9781933392462
N/A
Book picture is for illustrative purposes only, actual binding, cover or edition may vary.
This is a used book - there is no escaping the fact it has been read by someone else and it will show signs of wear and previous use. Overall we expect it to be in very good condition, but if you are not entirely satisfied please get in touch with us.