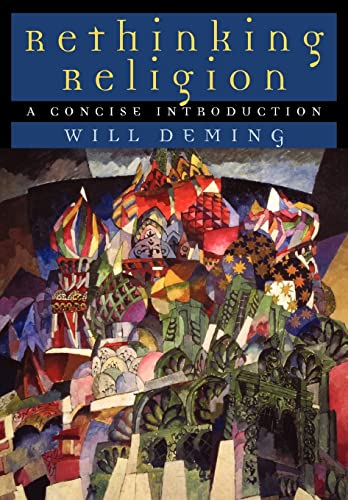 Rethinking Religion
by Will Deming

Used Price
$9.69
Free Shipping in the US
'Re-Thinking Religion' offers undergraduates a concise, highly readable point of entry into the study of religion. It discusses the importance of religion in today's world and provides a model for the analysis of religion, walking students through thirty examples taken from Hinduism, Buddhism, Judaism, Christianity, Islam and primal religions.
Reviews:
Trustpilot
Very Good

Rethinking Religion: A Concise Introduction by Will Deming

The overwhelming majority of people in the world-85%-are religious, and more religions are now practiced in the United States than in any other country. Religion plays a critical role in international politics, in the global economy, and in a wide variety of social and cultural interactions on the domestic front. Even though religion is such an integral part of today's world, many Americans have difficulty discussing it publicly. They are often unfamiliar with any religion but their own, finding other religions mysterious or even threatening. Offering a brief and accessible point of entry into the subject, Rethinking Religion: A Concise Introduction begins by highlighting the significance of religion in modern society and providing a simple definition that goes beyond vague notions of "faith" or "belief in God." Drawing material from a diverse range of religions-including Hinduism, Buddhism, Judaism, Christianity, Islam, and primal religions-author Will Deming walks readers through thirty examples of how religions "work," exploring the significance of religious events and pronouncements. He also considers several topics that continue to fascinate and challenge Westerners: the ethics of studying someone else's religion, the "truth" of religion, the possibilities for preferring one religion over another, religious pluralism, and the contentious dialogue between science and religion. Enhanced by an innovative glossary of religious terms and numerous pictures and analyses of everyday religious activities, Rethinking Religion: A Concise Introduction is ideal for introducing students to the concept of religion and for courses in comparative and world religions. It is also captivating reading for theologians, scholars, and anyone interested in the topic.

CIN000303009
Rethinking Religion: A Concise Introduction by Will Deming
Will Deming
Used - Very Good
Paperback
Oxford University Press Inc
2004-11-01
176
0195169816
9780195169812
N/A
Book picture is for illustrative purposes only, actual binding, cover or edition may vary.
This is a used book - there is no escaping the fact it has been read by someone else and it will show signs of wear and previous use. Overall we expect it to be in very good condition, but if you are not entirely satisfied please get in touch with us.