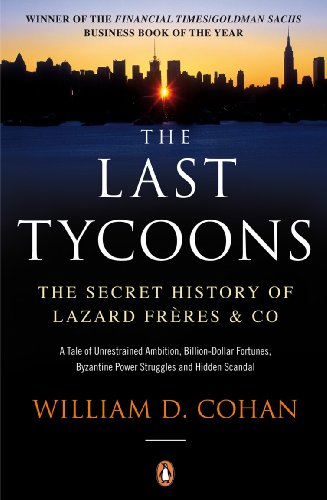 In Stock
$10.39
Tells the story of the world's elite and legendary investment bank - and the men who reigned over it all. In this title, the author himself a former high-level Wall Street banker, takes us into their mysterious and secretive world, telling a story of ruthless ambition, whispered advice, explosive feuds, decadent excesses and unimaginable wealth.
Very Good Good
9 in stock

William D. Cohan's The Last Tycoons: The Secret History of Lazard Freres & Co. is the astonishing story of the world's most elite and legendary investment bank - and the men who reigned over it all.

For over 150 years Lazard Freres had stood apart from other Wall Street firms by offering ultra-wealthy clients the wisdom of its 'Great Men': from Felix Rohatyn, the escapee from Nazi-occupied France turned financial genius, to Michel David-Weill, the inscrutable French billionaire 'Sun King'; from Steve Rattner, the boy wonder from Long Island who clashed violently with the old guard, to larger-than-life CEO Bruce Wasserstein, 'Bid-Em-Up-Bruce', who broke with the bank's traditions and made himself billions in the process. They amassed unimaginable fortunes and would stop at nothing to make a deal, until their titanic egos started to jeopardize everything.

'A definitive account ... it lives up to the billing'
The Times

William D. Cohan was an award-winning investigative journalist before embarking on a seventeen-year career as an investment banker on Wall Street. His first book, The Last Tycoons, about Lazard, won the 2007 Financial Times/Goldman Sachs Business Book of the Year Award and was a New York Times bestseller. His second book, House of Cards, also a bestseller, is an account of the last days of Bear Stearns & Co. He is also the author of Money and Power: How Goldman Sachs Came to Rule the World.

William D. Cohan is the New York Times bestselling author of The Price of Silence, Money and Power, House of Cards, and The Last Tycoons, which won the 2007 FT/Goldman Sachs Business Book of the Year Award. He is a special correspondent at Vanity Fair and writes a biweekly opinion column in The New York Times. He has also written for theFinancial Times, Bloomberg BusinessWeek, Fortune, The Atlantic, The Nation, and The Washington Post, among other publications. Cohan is a graduate of Duke University, Columbia University School of Journalism, and the Columbia University Graduate School of Business.

GOR001232162
The Last Tycoons: The Secret History of Lazard Freres & Co. by William D. Cohan
William D. Cohan
Used - Very Good
Paperback
Penguin Books Ltd
2008-04-03
752
0141036893
9780141036892
N/A
Book picture is for illustrative purposes only, actual binding, cover or edition may vary.
This is a used book - there is no escaping the fact it has been read by someone else and it will show signs of wear and previous use. Overall we expect it to be in very good condition, but if you are not entirely satisfied please get in touch with us.