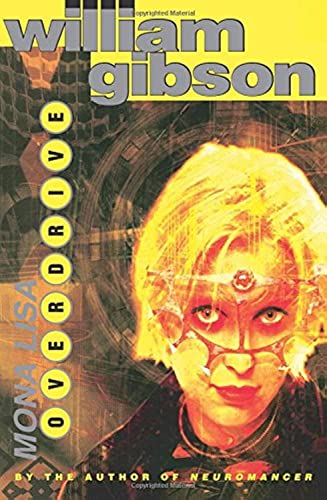 The last of the Sprawl trilogy: the AIs of Neuromancer have suffered a traumatized, cataclysmic coming to self-awareness and now haunt cyberspace as voodoo powers.

The last of the Sprawl trilogy: the AIs of Neuromancer have suffered a traumatized, cataclysmic coming to self-awareness and now haunt cyberspace as voodoo powers.

Mona's pimp sells her to a plastic surgeon in New York and she's turned overnight into someone else. The pimp winds up dead. Mona weeps for him. She's a sweet, dumb girl... so far.

Angie the famous Hollywood stim star has started remembering things. Despite the efforts of studio bosses to keep her in ignorance, Angie will discover who she really is... and why she doesn't need to jack into the Matrix in order to enter cyberspace.

In the depths of the rustbelt, the ring of steel garbage and toxic waste surrounding the Sprawl, Gentry obsessively seeks the darkest secrets of the Matrix. Seeking rapture.

When an impossibly tall and powerful skyscraper of data appears suddenly in the landscape of the Matrix, Gentry is ready for it, Angie is part of it, and Mona is set for overdrive. Rapture is on the agenda for all three, but others greedy for money and power will fight them to the death.

William Gibson was born in the United States in 1948. In 1972 he moved to Vancouver, Canada, after four years spent in Toronto. He is married with two children.

GOR010538258
Mona Lisa Overdrive by William Gibson
William Gibson
Used - Like New
Paperback
HarperCollins Publishers
1995-11-27
320
0006480446
9780006480440
N/A
Book picture is for illustrative purposes only, actual binding, cover or edition may vary.
This is a used book - there is no escaping the fact it has been read by someone else and it will show signs of wear and previous use. Overall we expect it to be in very good condition, but if you are not entirely satisfied please get in touch with us.