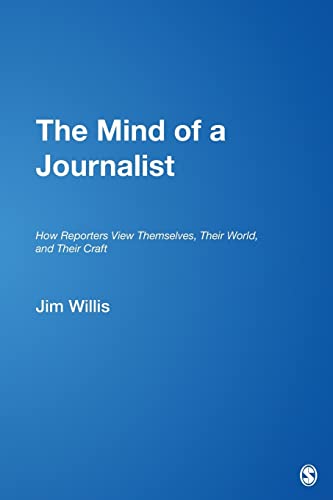 The Mind of a Journalist
by William James Willis

Used Price
$43.99
Free Shipping in the US
Insightful, approachable and engaging look at how journalists define themselves, their world, and their relation to that world.
Reviews:
Trustpilot
Very Good

The Mind of a Journalist Summary

The Mind of a Journalist: How Reporters View Themselves, Their World, and Their Craft by William James Willis

What propels an individual into becoming a professional observer and chronicler of society, joining a group that is often targeted for criticism by the general public?

Can a journalist really have an objective view of the world and the way it operates or do journalists each operate from a specific worldview, parts of which are held in common by all journalists?

Do journalists feel they can become involved in normal social and civic activities, or is the world a detached storehouse of ideas for stories?

Is the journalist most effective on the sidelines of society, or in getting involved in the action, or taking to the field as a referee or field judge?

If journalists are so devoted to the ideals of objectivity, detachment, truth, and providing an accurate view of the world, why do so many of them leave journalism and move into public relations, media consulting, and advertising?

These are just some of the issues explored in The Mind of a Journalist: How Reporters See Themselves, Their Stories, and the World. For students and would-be journalists, this book analyzes the rational processes journalists use in defining themselves, their world, and their relation to that world.

Written by veteran journalist and noted professor Jim Willis, with many observations from working and recently retired journalists from both print and broadcast, the goal of the book is to put this discussion of journalist thinking into the classroom (alongside discussion of reporting and writing techniques). Ultimately, the book provides added insights to how journalists think and why they do what they do.

Included throughout the book are many observations/interviews from working journalists at such media outlets as: The Los Angeles Times, The Boston Globe, CNN, The Memphis Commercial-Appeal, WRTV Television in Indianapolis, and The Daily Oklahoman. A running single-story example (President's Bush's decision to invade Iraq in 2003) shows how the same story was treated by several different journalist mindsets, and thereby examining how these different mindsets defined the issues of truth, ethics, and legality for this story.

Customer Reviews - The Mind of a Journalist

Jim Willis is a veteran journalist for The Oklahoman and The Dallas Morning News and is now Chair and Professor of Communication Studies at Azusa Pacific University in Southern California. His reporting assignments have included the Oklahoma City bombing, the F5 tornado that struck Oklahoma City, and the tenth anniversary of the fall of the Berlin Wall. He has taught at the universities of Missouri, Oklahoma, and Memphis, and chaired the Communication Department at Boston College. He has authored ten books on journalists and the media, and he lectures widely in Europe on the American news media. He holds the Ph.D. in Journalism from the University of Missouri and the B.A. from the University of Oklahoma. He is married and has two sons and three stepdaughters.

Foreword: The Thinking Journalist Chapter 1: The Lure of Journalism The Love of Reading and Writing An Intense Curiosity A Desire to Contribute The Independence Factor Being on the Inside The Challenges of Going Deeper Chapter 2: The Priesthood of Journalists Journalism as the Fourth Estate Learning the Ropes The Separated Journalist Journalists as Advocates Feeling the Pulse Granting Confidentiality Legal Ramifications of Confidentiality Editors Discourage Confidentiality Anonymous Sources in Washington Chapter 3: The Journalist's View of the World The Journalist and Worldviews The Importance of Time News as a Reflection of the World The Concept of Ethnocentrism Cultural Immersion The Risk of Involvement The Concept of Ambiguity Diversity Among Journalists The Socialization of Journalists Beliefs, Attitudes, and Values Chapter 4: Journalists, Theory, and Ethics The Pragmatics of Journalism Media Effects A Primer in Media Theory The Question of Objectivity Ethics and Journalists Fabricating News Credibility as "Currency of the Realm" Encouraging Ethics in Politics Diversity in the Newsroom Separating Business From Journalism Chapter 5: The Journalist as an Ideologue Revisiting Objectivity The Subjective Prisms of Cultures Enduring Values Journalists and Politics What the Data Reveal Serving as the Victims' Voice Reports, Inferences, and Judgments Where Passion Enters In Op-Ed News Chapter 6: The Journalist and Faith A Reluctant Story Top Religion Stories for 2007 Resources for Religion Writers An Interesting Study A Journalist's Own Religion Faith-Based Journalistic Organizations Faith-Based Media Stepping Into Another's Faith An Ongoing Tension A Final Thought Chapter 7: The Journalist as Celebrity An Obsession with Celebrity USC Targets the Issue Celebrity Journalists Critics From Within A Double Standard, an Expected Deference Katie Couric's New Persona Cooper's Emotional Journalism A Possible Distortion The Latest in a Trend? Chapter 8: Questions Vexing Journalists A Young Journalist Weighs In One Frustrated Anchor Rays of Hope Some Stay, Some Move On Epilogue: Reporting From Iraq: Journalists Talk About Covering War Afterword: A Personal Odyssey Appendix 1: Covering Katrina: On Taking It Personally Appendix 2: Thirteen Unique Journalists Selected Bibliography Index About the Author

GOR010089219
The Mind of a Journalist: How Reporters View Themselves, Their World, and Their Craft by William James Willis
William James Willis
Used - Very Good
Paperback
SAGE Publications Inc
2009-09-30
264
1412954576
9781412954570
N/A
Book picture is for illustrative purposes only, actual binding, cover or edition may vary.
This is a used book - there is no escaping the fact it has been read by someone else and it will show signs of wear and previous use. Overall we expect it to be in very good condition, but if you are not entirely satisfied please get in touch with us.