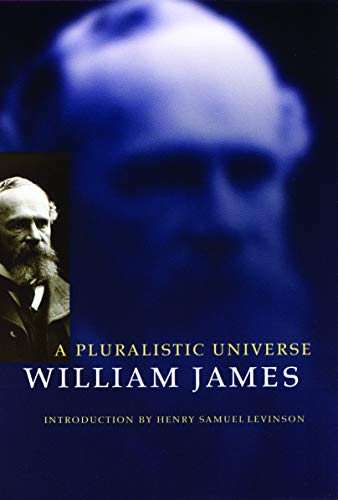 A Pluralistic Universe
by William James

Used Price
$19.99
Free Shipping in the US
In his famous lectures at Oxford University in 1908 and 1909, William James made a sustained and eloquent case against absolute idealism and intellectualism in philosophy. His own thinking led him to renounce monistic idealism and the intellectualization of all "truth." This title helps us in understanding James' thinking.
Reviews:
Trustpilot
Very Good

A Pluralistic Universe by William James

In his famous lectures at Oxford University in 1908 and 1909, William James made a sustained and eloquent case against absolute idealism and intellectualism in philosophy. Ever since Socrates and Plato, the philosophy of the absolute had held sway-the emphasis on essence at the expense of concrete appearance, the insistence on a coherent universe, abstract, timeless, finished, enclosed in its totality. James's own thinking led him to renounce monistic idealism and the intellectualization of all "truth."

Going against the grain of entrenched philosophy, James argues in A Pluralistic Universe that the world is not a uni-verse but a multi-verse. He honors the human experience of manyness and disconnection (and various kinds of unity) in the world of flux and sensation, a world that is discounted scornfully by the monists. "Pluralistic empiricism," as James called it, permits intellectual freedom, while the artificial concepts of monism do not. It approaches the only reality that has any meaning, one that follows the pattern of daily experience. A Pluralistic Universe, like Some Problems in Philosophy and Essays in Radical Empiricism (also available as Bison Books), is basic to an understanding of James's thought.

Henry Samuel Levinson, a professor and the head of religious studies at the University of North Carolina at Greensboro, is the author of Santayana, Pragmatism, and the Spiritual Life.

GOR006897028
A Pluralistic Universe by William James
William James
Used - Very Good
Paperback
University of Nebraska Press
1996-06-01
405
0803275919
9780803275911
N/A
Book picture is for illustrative purposes only, actual binding, cover or edition may vary.
This is a used book - there is no escaping the fact it has been read by someone else and it will show signs of wear and previous use. Overall we expect it to be in very good condition, but if you are not entirely satisfied please get in touch with us.