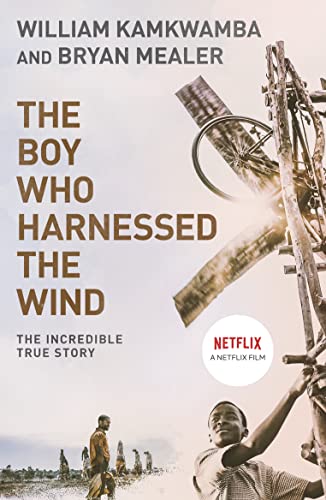 The Boy Who Harnessed the Wind
by William Kamkwamba

The Boy Who Harnessed the Wind Summary

Malawi is a country battling AIDS, drought and famine, and in 2002, a season of floods, followed by the most severe famine in fifty years, brought it to its knees. Like the majority of the population, William's family were farmers. They were totally reliant on the maize crop. By the end of 2001, after many lean and difficult years, there was no more crop. They were running out of food - had nothing to sell - and had months until they would be able to harvest their crop again.

Forced to leave school at 14 years old, with no hope of raising the funds to go again, William resorted to borrowing books from the small local library to continue his education. One day, browsing the titles, he picked up a book about energy, with a picture of a wind turbine on the front cover. Fascinated by science and electricity, but knowing little more about the technology, William decided to build his own. Ridiculed by those around him, and exhausted from his work in the fields every day, and using nothing more than bits of scrap metal, old bicycle parts and wood from the blue gum tree, he slowly built his very own windmill.

This windmill has changed the world in which William and his family live. Only 2 per cent of Malawi has electricity; William's windmill now powers the lightbulbs and radio for his compound. He has since built more windmills for his school and his village.

When news of William's invention spread, people from across the globe offered to help him. Soon he was re-enrolled in college and travelling to America to visit wind farms. This is his incredible story.

William's dream is that other African's will learn to help themselves - one windmill and one light bulb at a time - and that maybe one day they will be able to power their own computers, and use the internet, and see for themselves how his life has changed after picking up that book in the library.

Customer Reviews - The Boy Who Harnessed the Wind

The Boy Who Harnessed the Wind Reviews

`THE BOY WHO HARNESSED THE WIND is the inspiring story of a young man in Africa who used the only resources available to him to build a windmill and elevate the lives and spirits of those in his community. William Kamkwamba's achievements with wind energy should serve as a model of what one person, with an inspired idea, can do to tackle the crisis we face. His book tells a moving and exciting story.'
Al Gore, former Vice President and Nobel Laureate

`One of the best books I have ever read.'
Mark Frauenfelder, boingboing.net

"William is one of the bright young stars of the future and serves as an inspiration for other young people who want to know what they can do to help." Bishop Desmond Tutu

William Kamkwamba was born in1987 in Dowa, Malawi, and grew up on his family farm in Masitala Village, Wimbe, two and half hours northeast of Malawi's capital city. The second eldest of seven children, William has six sisters.
He currently lives in Malawi but has been sponsored to study at international schools and colleges in Cambridge, UK and Johannesburg, South Africa. In 2014, William Kamkwamba received his 4 year degree at Dartmouth College in Hanover, New Hampshire.

GOR007009478
The Boy Who Harnessed the Wind by William Kamkwamba
William Kamkwamba
Used - Like New
Paperback
HarperCollins Publishers
2010-03-04
288
0007316194
9780007316199
N/A
Book picture is for illustrative purposes only, actual binding, cover or edition may vary.
The book has been read, but looks new. The book cover has no visible wear, and the dust jacket is included if applicable. No missing or damaged pages, no tears, possible very minimal creasing, no underlining or highlighting of text, and no writing in the margins.