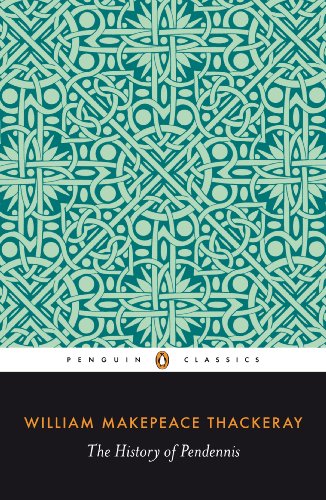 The History of Pendennis
by William Makepeace Thackeray

In Stock
$20.99
A portrait of England in the 1830s and 40s. It presents the character of Pendennis and the world in which he lives: from miserable schoolboy to striving journalist, from carefree Oxbridge to the high (and low) life of London.
Good
Only 3 left

The History of Pendennis Summary

The History of Pendennis: His Fortunes And Misfortunes, His Friends And His Greatest Enemy by William Makepeace Thackeray

Written immediately after Vanity Fair, Pendennis has a similar atmosphere of brooding disillusion, tempered by the most jovial of wits. But here Thackeray plunders his own past to create the character of Pendennis and the world in which he lives: from miserable schoolboy to striving journalist, from carefree Oxbridge to the high (and low) life of London. The result is a superbly panoramic blend of people, action and background. The true ebb and flow of life is caught and the credibility of Pen, his worldly uncle, the Major, and many of the other characters, extends far beyond the pages of the novel. Held together by Thackeray's flowing, confident prose, with its conversational ease of tone, Pendennis is as rich a portrait of England in the 1830s and 40s as it is a thorough and thoroughly entertaining self-portrait.

William Makepeace Thackeray was born in Calcutta in 1811, but sent to England at the age of six. He was educated at Charterhouse and at Trinity College, Cambridge. In 1833 he settled in Paris, after a major financial loss, and tried a career as a painter. It was here he met nineteen-year-old Isabella Shawe, upon whom he based many of his virtuous but weak heroines, and whom he married in 1836. A year later they settled in London, where Thackeray turned seriously to journalism.
His writing for periodicals included The Yellowplush Correspondence, which appeared first in Fraser's Magazine and then in 1841 in book form. Around this time personal and domestic pressures caused the already helpless Isabella to subside into a state of complete and permanent mental collapse and the subsequent breakdown of the marriage formed a central part of Thackeray's consciousness. His early work centred around rogues and villains, most famously in The Luck of Barry Lyndon (1844; revised as The Memoirs of Barry Lyndon, Esq. in 1856), and in his masterpiece, Vanity Fair, which appeared in monthly parts in 1847-8 and which most clearly reveals his socially satirical edge. The Book of Snobs, which originally appeared as a series in Punch, also attacks Victorian society with vicious wit. Thackeray's later novels include The History of Pendennis, (1848-50); The History of Henry Esmond, Esq. (1852); The Newcomes (1853-5); The Virginians, (1857-9), which is a sequel to Henry Esmond; and The Adventures of Philip (1860-62). He also wrote a series of lectures, The English Humourists of the Eighteenth Century (1853), and numerous reviews, articles and sketches, usually in the comic vein. From 1860 to 1862 he also edited the Cornhill magazine. Thackeray died suddenly on Christmas Eve, 1863.

GOR001730098
The History of Pendennis: His Fortunes And Misfortunes, His Friends And His Greatest Enemy by William Makepeace Thackeray
William Makepeace Thackeray
Used - Good
Paperback
Penguin Books Ltd
1986-06-26
816
0140430768
9780140430769
N/A
Book picture is for illustrative purposes only, actual binding, cover or edition may vary.
This is a used book - there is no escaping the fact it has been read by someone else and it will show signs of wear and previous use. Overall we expect it to be in very good condition, but if you are not entirely satisfied please get in touch with us.