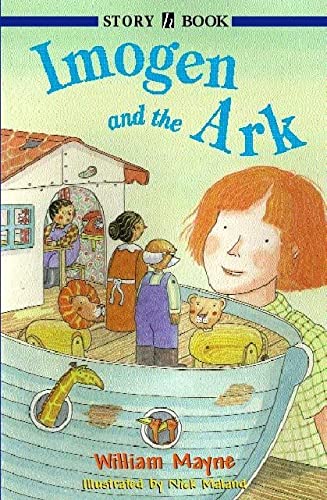 Imogen and The Ark
by William Mayne

Imogen and The Ark Summary

Imogen and The Ark by William Mayne

Grandfather buys a toy Ark for Imogen, to be fetched the next day. So Imogen sticks a note: 'this probably belongs to Imogen', inside. In the night, a fire destroys the shop; and the flood from the sprinklers sweeps the Ark down the drain on a rocking ride around the world and, finally, back to the rebuilt shop. Imogen, of course, can show the shopkeeper that the Ark is really hers, because there is the sticky paper saying so. And anyway, she knows what's been happening to Noah and his family on their extraordinary journey because she's been thinking about them all the time - and even talking to them on her bright red telephone.

Imogen and The Ark Reviews

A highly original story * The Daily Telegraph *
A perfect book to share with someone like my six-year old niece, who loves to ask questions'. 'A totally different slant on the story * TARA STEPHENSON BLACKWELL'S CHILDREN'S BOOKSHOP *
A wonderful enchanting story ... Imogen and the Ark is something special * Books For Keeps *

William Mayne has been described as one of the outstanding children's authors of this century (Oxford Companion to Children's Literature). He has won all major awards including the Guardian and the Carnegie. Susan Hill wrote of The Fox Gate, 'These stories for eight-year-olds and up are jewels . . . 'timeless' and 'classic' should be used sparingly, but are justified here.' (Daily Telegraph)

GOR001239818
Imogen and The Ark by William Mayne
William Mayne
Story Book
Used - Very Good
Paperback
Hachette Children's Group
2000-06-15
112
0340743735
9780340743737
N/A
Book picture is for illustrative purposes only, actual binding, cover or edition may vary.
The book has been read but remains in clean condition. All pages are intact and the cover is intact. Some minor wear to the spine.