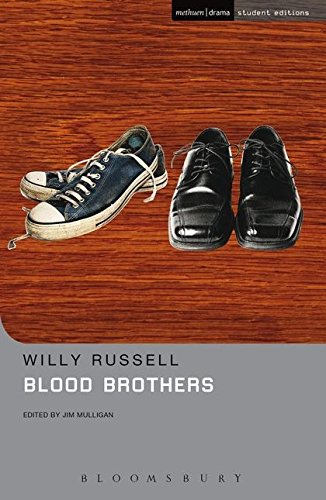 Used Price
$9.39
Free Shipping in the US
This Student Edition of Willy Russell's successful folk opera, the story of two Liverpudlian brothers who grow up on opposite sides of the social tracks, includes biographical notes and an introduction to the play with guidance on its interpretation.
Reviews:
Trustpilot
Very Good Good

A Liverpudlian West Side Story, Blood Brothers is the story of twin brothers separated at birth because their mother cannot afford to keep them both. One of them is given away to wealthy Mrs Lyons and they grow up as friends in ignorance of their fraternity until the inevitable quarrel unleashes a blood-bath. Blood Brothers was first performed at the Liverpool Playhouse in 1983 and subsequently transferred to the Lyric Theatre, London. It was revived in the West End in 1988 for a long-running production and opened on Broadway in 1993.

Willy Russell was born in Whiston near Liverpool and left school at fifteen. He went through a succession of jobs before, at the age of twenty, he decided to take 'O' levels and 'A' levels and become a teacher. At about the same time he saw John McGrath's play Unruly Elements at the Everyman Theatre, Liverpool, and decided he wanted to become a playwright. His plays include: ONE FOR THE ROAD, STAGS AND HENS, EDUCATING RITA, BLOOD BROTHERS and SHIRLEY VALENTINE.

GOR001282238
Blood Brothers by Willy Russell
Willy Russell
Student Editions
Used - Very Good
Paperback
Bloomsbury Publishing PLC
1995-08-14
128
0413695107
9780413695109
N/A
Book picture is for illustrative purposes only, actual binding, cover or edition may vary.
This is a used book - there is no escaping the fact it has been read by someone else and it will show signs of wear and previous use. Overall we expect it to be in very good condition, but if you are not entirely satisfied please get in touch with us.