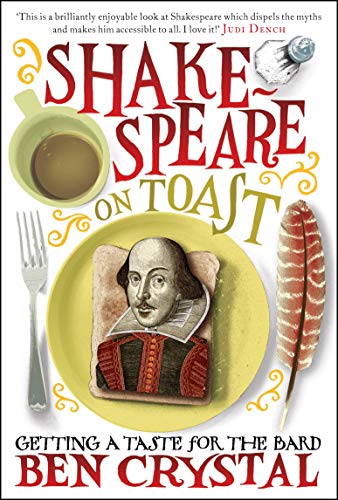 Who's afraid of William Shakespeare? Just about everyone. He wrote too much and what he did write is inaccessible and elitist. Right? Wrong. This title knocks the stuffing from the staid old myth of Shakespeare, revealing the man and his plays for what they really are: modern, thrilling and uplifting drama.

Shakespeare on Toast: Getting a Taste for the Bard Ben Crystal

Who's afraid of William Shakespeare? Just about everyone. He wrote too much and what he did write is inaccessible and elitist. Right? Wrong. "Shakespeare on Toast" knocks the stuffing from the staid old myth of Shakespeare, revealing the man and his plays for what they really are: modern, thrilling and uplifting drama. Actor and author Ben Crystal brings the bright words and colourful characters of the world's greatest hack writer brilliantly to life, handing over the key to Shakespeare's plays, unlocking the so called difficult bits and, astonishingly, finding Shakespeare's own voice amid the poetry. Told in five fascinating Acts, "Shakespeare on Toast" sweeps the cobwebs from the Bard - from his language, his life, his time - revealing both the man and his work to be relevant, accessible and full of beans.
`Ben Crystal's excellent book is an ideal way to gain an understanding of why Shakespeare is so brilliant and so enjoyable.' -- Sir Richard Eyre
'This is a brilliantly enjoyable, light-hearted look at Shakespeare which dispels the myths and makes him accessible to all. I love it!' -- Judi Dench
`A recent poll of teenagers found Shakespeare to be the least favourite read of those consulted. Ben Crystal, an actor at The Globe and author of two previous books on the Bard, hopes to change all this. He does so by focusing on the universality and timelessness of Shakespeare's appeal and by unraveling the poetry and its impact on our language, as well as the whole notion of what constitutes `entertainment' in our times.' -- Publishing News
`A master class for modern beginners and old hands alike.' -- Times
`Having Crystal as a companion through the stickier parts of Hamlet and Macbeth is like going to the theatre with an intelligent friend.' -- Independent
`Enjoyable, light-hearted, accessible guide to Shakespeare.' -- Inthenews
`An enthusiastic, accessible and entertaining introduction to Shakespeare.' -- Bookbag
`This book makes the reader want to get to a Shakespeare play as soon as possible to see how much of it has sunk in.' -- Ham & High
`Shakespeare on Toast is reassuring, and appealing, and Crystal's bounding enthusiasm is hard to resist. If, like Crystal, you're a bit of a Shakespeare evangelist, you'll want all your Shakespeare-resistant friends to read it. I'll certainly be buying copies for mine.' -- Around the Globe
`[Crystal] is at his best when demonstrating the plays' origins in the demanding world of early modern theatre.' -- Times Literary Supplement
`This should be required reading for actors, anyone doing English Literature at school or university, and the girls who spoiled the performance of The Merry Wives of Windsor I went to at the Globe this summer by whispering to each other that they couldn't understand a word. Highly recommended.' -- Civilian Reader Blog
`Humorous, unpretentious and fascinating.' -- Independent on Sunday
`a surprise hit' -- Libby Purves, Midweek, Radio 4
`Ben Crystal's witty and engaging book is a relaxed, user-friendly reminder that enjoying Shakespeare should be as easy as breathing.' -- Dominic Dromgoole, Artistic Director, Shakespeare's Globe
`Digestible and informative how-to-guide... Crystal's explanations fizz and sparkle with educated clarity and infectious enthusiasm.' -- What's on Stage
`It's a lively and unpretentious attempt to make Shakespeare more accessible to those who are daunted by his status and reputation.' -- Rosemary Ham, Speaking English Journal
`Before you read the play, go and see it. Before you go and see it, read Shakespeare on Toast!' -- Stewart Ross, judge for the Society of Authors, Ceremony for the Educational Writer of the Year Award 2010
Ben Crystal is an actor and writer. He has worked in TV, film and theatre, including the reconstructed Shakespeare's Globe, London, and is a narrator for RNIB Talking Books, Channel 4 and the BBC. He co-wrote Shakespeare's Words (Penguin 2002) and The Shakespeare Miscellany (Penguin 2005) with David Crystal, and regularly gives talks and workshops on Shakespeare.
GOR002074090
9781848310162
1848310161
Shakespeare on Toast: Getting a Taste for the Bard Ben Crystal
Ben Crystal
Occasion - Très bon état
Relié
Icon Books Ltd
2008-09-04
276
N/A
La photo du livre est présentée à titre d'illustration uniquement. La reliure, la couverture ou l'édition réelle peuvent varier.
Il s'agit d'un livre d'occasion - par conséquent, il a été lu par quelqu'un d'autre et il présente des signes d'usure et d'utilisation antérieure. Dans l'ensemble, nous nous attendons à ce qu'il soit en très bon état, mais si vous n'êtes pas entièrement satisfait, veuillez prendre contact avec nous.