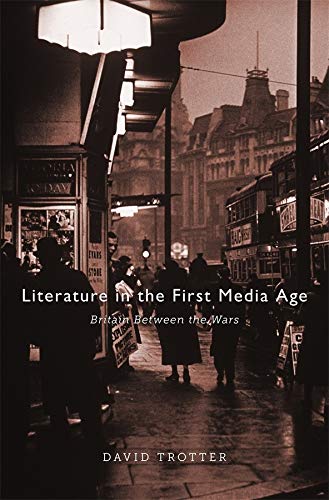 Communications technology is an idea about the prosthetic enhancement of our capacity to communicate. Some of the writers who first woke up to this fact lived and wrote in Britain between the World Wars. Here, David Trotter creates a new literary canon of works distinguished by their alertness to the implications of new media and materials.

Literature in the First Media Age: Britain between the Wars David Trotter

The period between the World Wars was one of the richest and most inventive in the long history of British literature. Interwar literature, David Trotter argues, stood apart by virtue of the sheer intelligence of the enquiries it undertook into the technological mediation of experience. After around 1925, literary works began to portray communication by telephone, television, radio, and sound cinema--and to examine the sorts of behavior made possible for the first time by virtual interaction. And they filled up, too, with the look, sound, smell, taste, and feel of the new synthetic and semi-synthetic materials that were reshaping everyday modern life.

New media and new materials gave writers a fresh opportunity to reimagine both how lives might be lived and how literature might be written. Today, Trotter observes, such material and immaterial mediations have become even more decisive. Communications technology is an attitude before it is a machine or a set of codes. It is an idea about the prosthetic enhancement of our capacity to communicate. The writers who first woke up to this fact were not postwar, postmodern, or post-anything else: some of the best of them lived and wrote in the British Isles in the period between the World Wars. In defining what they achieved, this book creates a new literary canon of works distinguished formally and thematically by their alertness to the implications of new media and new materials.

David Trotter's brilliant study is a radical exploration of literature in its relations to technologies and material cultures between the wars. It offers inspired new ways of understanding the preoccupations and aspirations of a period, through models of connectivity and communication which will displace our now familiar maps of early twentieth-century texts and contexts. Literature in the First Media Age is surprising and illuminating at every turn. -- Laura Marcus, Oxford University
Literature in the First Media Age is a work of exhilarating virtuosity and great interpretative power. Elegantly conceived, original, inventive and generative, it will stand as an indispensable text in modernist studies.
-- Michael Levenson, University of Virginia
The originality of the work shows itself in every chapter. We can be grateful to David Trotter for changing our understanding of a decisive epoch in cultural history. -- Edward Dimendberg, University of California, Irvine

A highly learned account of how new 'connective' media (generally the
ones with 'tele-' in front) changed the nature of narrative in inter-war British literature... The long decade [Trotter] covers was an astonishing epoch in British life and writing and he illuminates its contexts, its competing utopianism and glumly retro anxiety (the end of polite culture! the disappearance of craft! a world too big and too impersonal!). He covers it with an unerring eye for detail and ear for tonal shifts in how we represented ourselves.